The second week of 2017 Los Angeles Marathon training had us doing something a little different. Instead of meeting up at Griffith Park on Saturday, we instead met on Sunday, October 23rd, in Downtown LA for the annual AIDS Walk. But while the word WALK is prominently displayed in the event signs, we were there instead to run it, and it proved to be a good preview of what we can expect in March 2017.

Now the AIDS Walk is typically held in West Hollywood, but this time it took place in Downtown LA and for the very first time. Another runner told me this was because the Governor wanted to spread out the LGBT related events throughout the city so the acceptance of them could be wider and wouldn’t necessarily be confined to one part of it. This change did throw some people off as they used to be able to just walk down to the event which was a block away from the apartment, and when something like this is held downtown, you can sure bet traffic will be a nightmare for everyone foolish enough to be driving. 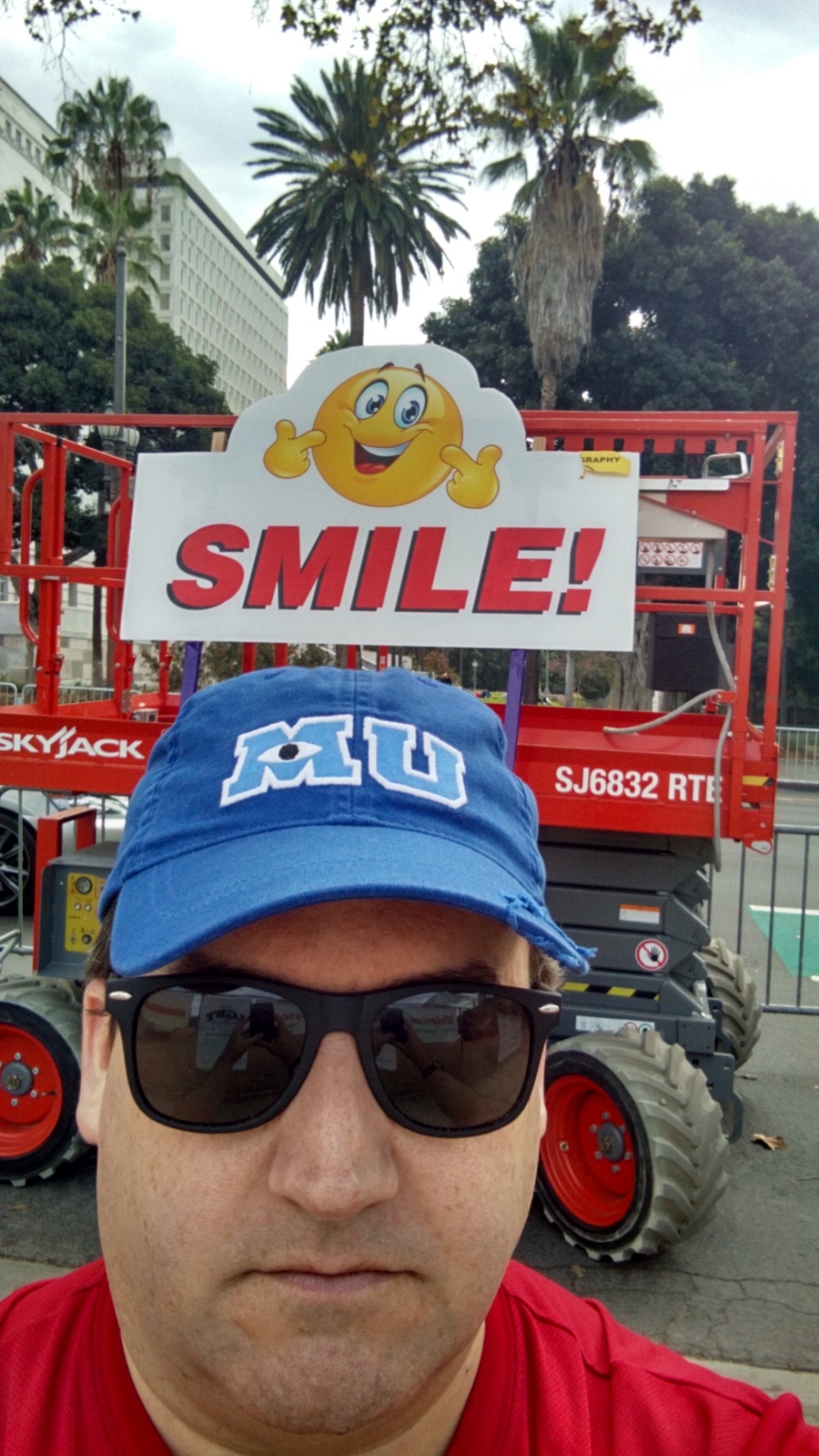 For me, the AIDS Walk being in Downtown LA got me to do something I haven’t done since living out here: use the Metro Rail. The coaches begged us to use public transportation as the odds of us finding parking were going to be remote at best, and getting in and out of town was going to be an endurance test of another kind (and one which is not at all healthy).

I went to the Jefferson/La Cienega station, one which I have passed by many times back when I commuted to Marina Del Rey on a regular basis. That they did not charge a fee for parking there was both a surprise and a delight as parking is such a racket in Los Angeles, one which sucks too much money out of our wallets. The cost of going one way into Downtown LA? $1.75. Looking at the price, I immediately wondered why I never bothered using this service before. There’s no denying how cost effective it is.

Of course, being this was my first time riding on the Metro (thank you, Berlin

), I was afraid I was going to screw up and get on the wrong train. I also had to make a transfer at 7th Street Station and get on either the Red or Purple Line to get to Civic Center which was our meet up point. A lot of times when I’m afraid of going in the wrong direction, I usually do. Fortunately, thanks to the dozens of people wearing AIDS Walk t-shirts at 7th Street Station, I was fairly confident I was heading in the right direction.

It was fun traveling on the Metro Express as it brought back memories of when I took the BART train into San Francisco. At the same time, it reminded me of all the dead and passionless faces I saw seated near me as people looked like they had the life sucked out of them long ago. That scared me to death because I thought I would end up looking like them before I knew it. I still get scared of that even to this very day.

When I finally arrived at the Civic Center/Grand Park Station, I made my way down 1st Street where the T2EA runners were meeting up. The major plus of this event is that our group was always the one to start off, and we would always start just before everyone else did because AIDS Walk primarily benefits AIDS Project Los Angeles (APLA) which we run in support of. While everyone else has to wait behind barricades like cattle, we sat at the very front and were more than ready to conquer the asphalt and concrete roads of Downtown LA.

Coach James and Coach Kerry said we may find ourselves wanting to treat the AIDS Walk as a race, but we needed to resist the urge. In retrospect, I ran way too fast. I’m in the 15-minute pace group, and my average pace for this event was 12:57. I spent a lot of time trying to focus on my form as I’m always afraid I am slouching or leaning forward too much. It didn’t occur to me right away that I was running too fast. I wanted to keep up with my fellow T2EA runners, but as usual the majority of them left me in the dust. As training continues, I want to work harder at being lighter on my feet.

The volunteers proved to be as supportive as those at the LA Marathon, coming out to give us high fives as well as water, chips, bottles of Gatorade and Muscle Milk, and they even had ice cream and popsicles. I was close to getting a popsicle, but I already had a bottle of Muscle Milk in my hands and decided not to overdo it. Plus, I’m on a diet, or so I keep telling myself.

The major upside was the weather wasn’t too hot or too cold. It was overcast with a nice breeze; a big contrast with last year’s AIDS Walk which had us suffering through temperatures in the triple digits. This time we were lucky and not frying like eggs on the sidewalk. It would have been nice, however, to have had a celebratory lunch in a restaurant with air conditioning.

Coming into this, we were told the whole thing would be 6 miles long. But as I was approaching the 5-mile stretch, one of my fellow T2EA runners who was standing to the side and told me, “Just kidding! It’s only 4.87 miles long!” In other words, PSYCHE! I don’t think the coaches realized it was shorter than everyone expected, but it was just as well as I crossed the finish line because the last hill, which proved to be steeper than any we run up during the LA Marathon, pretty much did me in.

Volunteers gave us paper certificates confirming we completed the 2016 AIDS Walk, and they also handed us reusable Walgreen bags which we filled up with bottles of Gatorade and Propel as well as bags of French Onion Sun Chips, Cheetos, Veggie Ranch Sun Chips, Kettle Cooked chips, and I imagine there was some Doritos chips out there somewhere. I kept putting a whole bunch of things in my bag, figuring a volunteer would at some point order me to stop hogging all the goodies. Still, it looked like the volunteers were desperate to give everything away in an effort to justify all the boxes of goods purchased.

Looking back, I think I had a good run. I just need to watch my speed in the future weeks and keep up with the maintenance runs. Also, it would be great to get some more cardio exercises in.

But the real benefit of this AIDS Walk was discovering the Metro Rail as I plan to make more use of it in the near future. No more of this paying $10 to $15 dollars for parking. Like Clint Eastwood kept saying in the movie “In the Line of Fire,” I love public transportation. 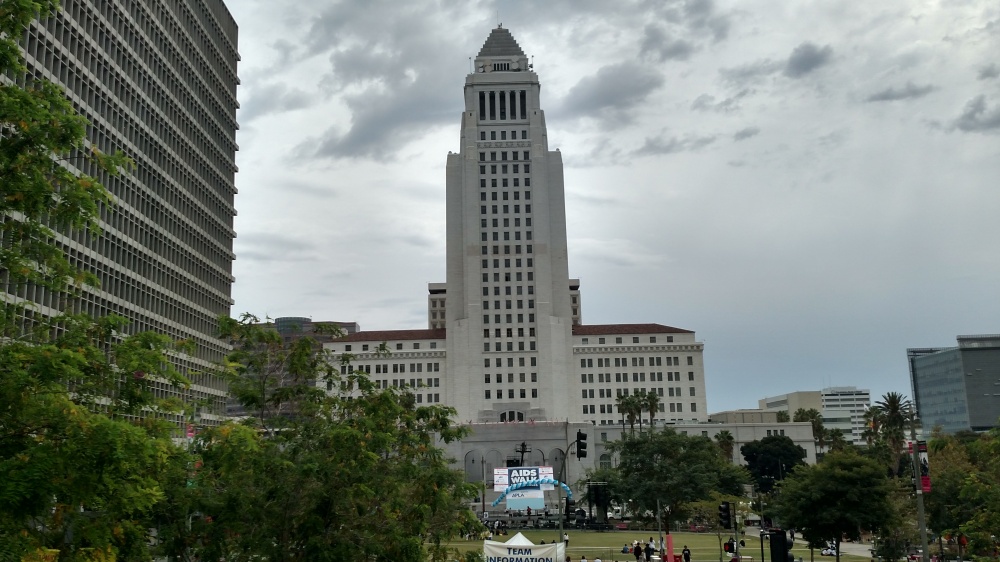 UPDATE: I am once again raising money for AIDS Project Los Angeles and am trying to reach my goal of $1,100 before the year’s end. All donations are tax-deductible and go to a great organization. Please click here to make an online donation, or you can download a form to instead pay by check. No donation is too small or too big. Thanks for reading.