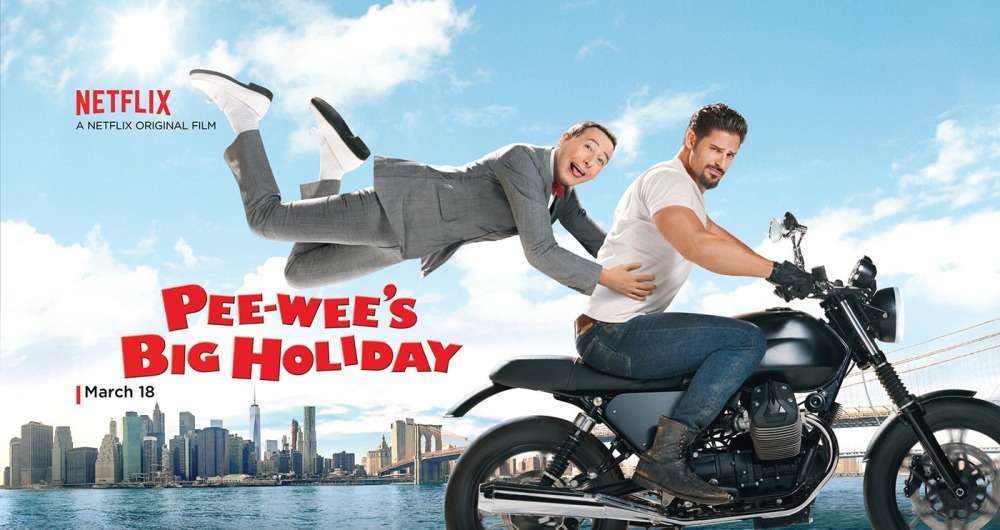 Pee-wee Herman was a big fixture in our young lives whether we liked it or not. Ever since the character’s first appearance at The Groundlings Theater, he amassed a large audience that grew infinitely beyond anyone’s wildest dreams. Both he and Tim Burton realized their big screen dreams with “Pee-wee’s Big Adventure,” and soon after he had his own Saturday morning show with “Pee-wee’s Playhouse.” Then he disappeared for a time and if we were sick of him, his absence made us realize how much we liked and got used to having him around.

Well in the past couple of years he has made a welcome comeback, and now it culminates in his first big screen adventure in decades, “Pee-wee’s Big Holiday.” Don’t let the fact it is debuting on Netflix turn you off (and why should it?). It’s an infinitely giddy movie which will have kids and adults alike laughing hysterically more often than not. While it seems to take place in an alternate universe where “Pee-wee’s Big Adventure” never took place, please rest assured that this man child has not changed and hasn’t aged a day.

When we meet up with Pee-wee, he lives in the picturesque town of Fairville where everyone seems more than willing to help him out with his Rube Goldberg-like devices and machines which get him up and out of his house in the morning. He is perfectly happy to work as a cook at Dan’s Diner and rehearse with his rock group to where the thought of going outside the city limits seems unthinkable. But this all changes when Joe Manganiello shows up as he plays… Well, you’ll have to see for yourself.

Anyway, Manganiello encourages Pee-wee to go beyond Fairville’s city limits and to find out more about life, and he even invites him to a birthday party taking place in New York City. Despite some hesitation, Pee-wee agrees and endures all sorts of adventures and mishaps as he makes his way from one side of America to the other.

What’s great about “Pee-wee’s Big Holiday” is how the humor succeeds in appealing to both kids and adults without condescending to either group. The kids will definitely enjoy Pee-wee’s antics as he braves a snake farm which is not all it appears to be and performs a balloon trick which has to be seen to be believed. Adults on the other hand will get a huge kick out of the subversive elements hidden throughout the screenplay which includes references to cult classics like Russ Meyers’ “Faster, Pussycat! Kill! Kill!” There’s even a great moment where “Magic Mike” is mentioned, and I wouldn’t dream of spoiling it for you here.

Tim Burton and Danny Elfman, whose movie careers exploded after the success of “Pee-wee’s Big Adventure,” weren’t around for this one. This particular adventure was directed by John Lee who became best known for his work on the MTV2 comedy series “Wonder Showzen” and episodes of “Inside Amy Schumer.” Lee keeps the pace of “Pee-wee’s Big Holiday” tight to where the movie never drags. Granted, the jokes are at times hit and miss, but the ones which do hit had me laughing harder than I had in some time.

Devo lead singer Mark Mothersbaugh composed the film score, and he seems like a natural choice to succeed Elfman. Both Mothersbaugh and Elfman have had long working relationships with unique film directors (Elfman with Burton, and Mothersbaugh with Wes Anderson), and their scores perfectly capture the playfulness and creativity we see unfolding onscreen, Whether or not you think Mothersbaugh’s work equals what Elfman pulled off years before, he is a terrific fit for this material and captures the infinite innocence of Pee-wee.

But what’s really nice is how Paul Reubens brings his man child alter-ego of Pee-wee Herman back to life after such a long hiatus. I figured Reubens had long since grown tired of this character to where it seemed like he had engineered a rather embarrassing escape from playing him. Reubens even went on to show his acting range with terrific performances in “Blow” and “Life During Wartime,” proving to the world there was way more to him than Pee-wee. But you can see on Reubens’ face throughout just how super enthusiastic he was about bringing this iconic character back to life, and he makes you realize just how much we have missed him lo these many years.

The only thing which could possibly take away from Reubens’ thunder here is Manganiello who steals every single scene he’s in. He could have easily screwed up here by playing his role like he was in on the joke, but he doesn’t and it help makes “Pee-wee’s Big Holiday” all the more fun to watch. Manganiello looks like he’s having a blast here, and his fun is very contagious.

There have been a lot of popular characters from the 1980’s resurrected over the past few years with varying degrees of success, and Reubens’ is more successful than others in doing so. His passion is sincere in bringing this character back from the land of syndication and reruns, and seeing him in action makes it seem like he never left us. Here’s hoping we see Pee-wee Herman taking on more big adventures in the near future.