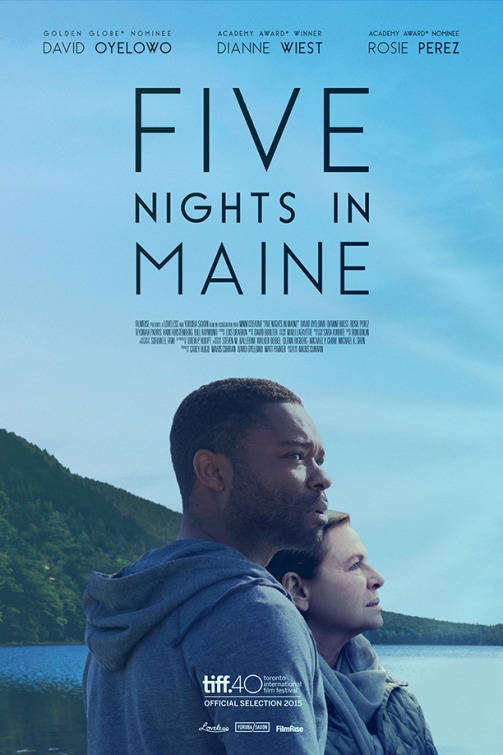 When it comes to dealing with grief, there is no textbook with instructions on how to cope. In movies we often see characters react to the death of loved one in a way that feels overly dramatic and never real. Sometimes the tears come right away, but other times you are simply in shock as accepting the reality of a death takes a long time. We are lead to believe everyone grieves in the same way, but that is simply not true as writer and director Maris Curran shows us in “Five Nights in Maine.”

We are introduced to Sherwin (David Oyelowo) while he is having a wonderfully intimate moment with his wife, Fiona (Hani Furstenberg), and then a few scenes later he gets a call from the police informing him she was killed in a car accident. Overwhelmed by this sudden loss, Sherwin goes on alcoholic binge to deaden the pain which seems never ending. Out of the bluw, he receives a call from his estranged and terminally ill mother-in-law, Lucinda (Dianne Wiest), who invites him to stay with her at her secluded home in rural Maine in order to find a way to deal with the loss of someone they cared so much about.

Now at this point “Five Nights in Maine” looks to be one of those Hollywood movies where two people from different parts of life come together to sort out their differences and come to see what makes their suffering the same. Well, this movie is and isn’t that. What’s fascinating is how Sherwin and Lucinda don’t share grief as much as they compete with each other over who is grieving the most. It’s almost like a variation on a classic Ethel Merman song:

“Any grief you can feel, I can feel greater. I can feel it greater, greater than you.”

Is this the best way to deal with grief? Perhaps not, but it is the way Sherwin and Lucinda decided to take. Sherwin tries to reason with Lucinda who is cantankerous and difficult to deal with, and it turns out Lucinda’s last meeting with her daughter did not go well at as Fiona returned from it very upset. As the movie goes on, you wonder if it is possible for either of them to find any common ground on Fiona’s passing. After a while, you just hope and pray they find a way through their immense pain to move on with their lives or, especially in Lucinda’s case, what’s left of them.

If there is one reason to see “Five Nights in Maine” other than the wonderful cinematography by Sofian El Fani, it’s the performances. David Oyelowo, criminally robbed of an Oscar nomination for his performance in “Selma,” reaches some deep emotional depths as Sherwin. The reaction Sherwin gibes off upon learning of Fiona’s death feels so amazingly genuine that you wonder how Oyelowo was able to portray it with such piercing honesty. This is clearly not an actor who takes the easy way out when it comes to any role he takes on.

Wiest, an actress we don’t see enough of these days, gives her strongest performance in quite some time as a mother facing death’s door and trying to understand why her daughter made it through there before she did. She is not out to make Lucinda an easily likable person, but she does show the cracks in her stern face as the reality of Fiona’s death begins to settle in.

There’s also a wonderfully understated performance here by Rosie Perez who plays Lucinda’s nurse, Ann. This character serves to fill in the missing blanks of which Sherwin was not witness to when Fiona met with Lucinda for the last time. Knowing how sassy Perez can be on screen or during her time on “The View,” her performance in “Five Nights in Maine” is a compassionate one which doesn’t require her unbridled enthusiasm to make it work. Watching her here serves as a reminder of her Oscar nominated performance years ago in Peter Weir’s “Fearless,” and how dare we forget how good she was in that one.

Curran, just as Josh Mond did with his film “James White,” sticks the camera right in his actors’ faces to where their every little gesture and facial movement comes to speak volumes when words cannot do the same. She is also not a director looking to spell out everything for the audience which I admire, and she doesn’t bang them over the head with a shamelessly manipulative film score. Speaking of which, David Boulter’s music helps heighten how lost the characters are in their own wilderness of pain and guilt.

Having said all that, I cannot help but have mixed feelings about “Five Nights in Maine.” While the acting is stellar and the direction strong, Curran’s screenplay feels strangely incomplete. While the actors are able to plumb the depths of their characters, Curran ends up keeping us at an arms-length distance from them. I came out of this movie feeling like I could have gotten to know them better, and their resolution over the loss they experienced does not feel entirely fulfilling. Like I said, Curran doesn’t spell everything out for the audience, but I wished she had dug even deeper into the characters’ psyches to give us something more memorable.

There is a lot to like about “Five Nights in Maine,” but I found some time after watching it that it didn’t leave much of an aftertaste. Overall the movie is a near miss for me. The performances are strong, but the story and the screenplay are an incomplete puzzle with pieces which shouldn’t be that hard to find. This movie quickly reminded me of the Peter Gabriel song “I Grieve” which offered a far more complete journey through grief in just a few minutes’ time. When this movie concludes, it still feels like Sherwin and Lucinda still have a long way to go to find peace with what happened.