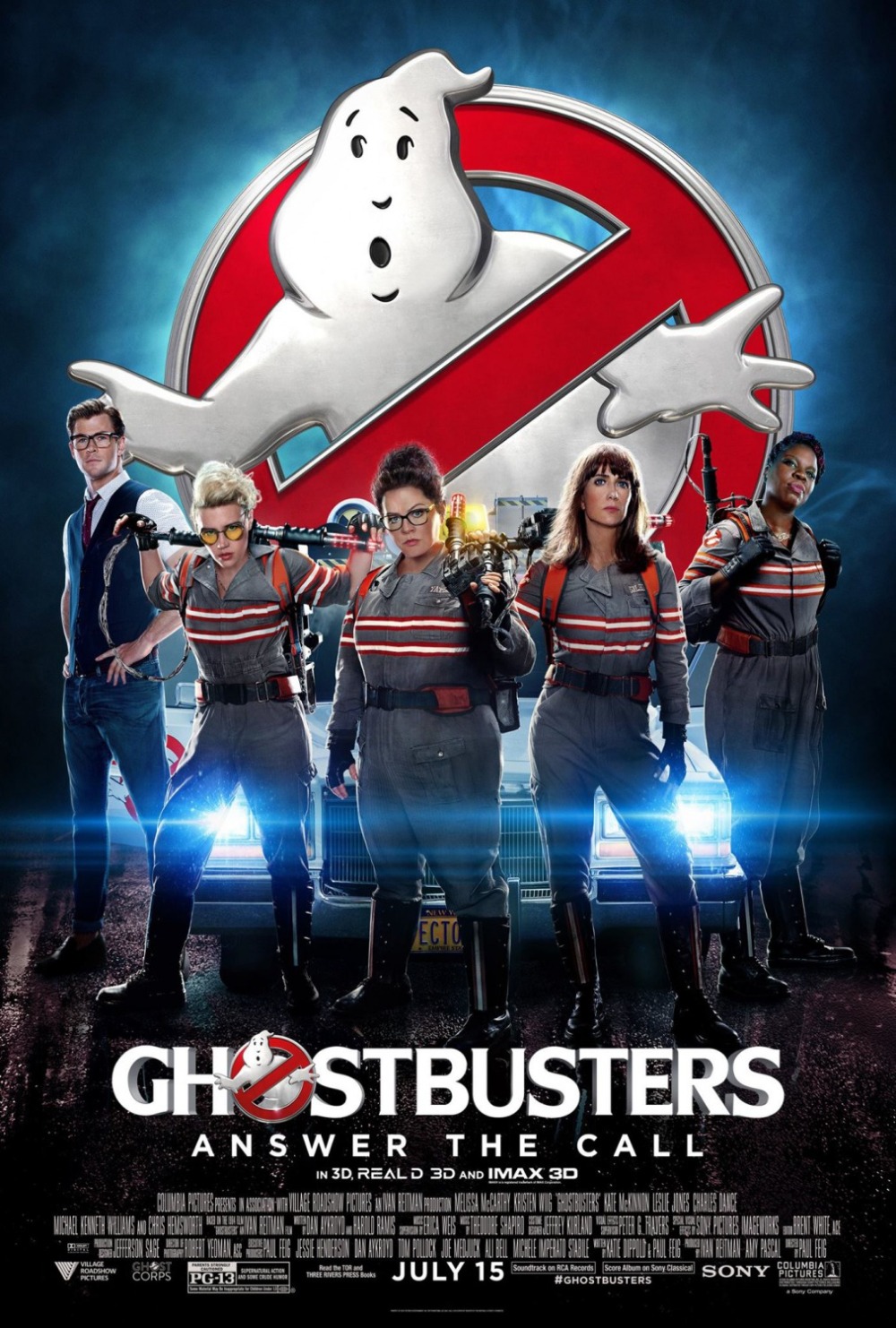 After being stuck in development hell for much longer than it took to get “Independence Day: Resurgence” to the silver screen, the new “Ghostbusters” movie is now playing in theaters everywhere. The filmmakers should get an award for actually getting this movie made as we spent years hearing news that production was on again and off again, that Bill Murray wasn’t interested in playing Dr. Peter Venkman again, and whether Ivan Reitman or Harold Ramis was going to direct. Well, it’s just as well we never got a “Ghostbusters 3” as the reasons to not make it kept piling up. Instead we have this reboot which proves to be a lot of fun for fans and a new generation eager to prove they ain’t afraid of no ghost.

We meet Dr. Erin Gilbert (Kristen Wiig), a teacher at Columbia University who is ever so eager to get tenure. The problem is that her former friend, Abby Yates (Melissa McCarthy) is once again promoting a book they wrote together that deals with the existence of ghosts and paranormal activity. This book, however, proved to be unpopular and Erin has tried to distance herself from it ever since. But upon meeting Abby at her laboratory where she works with eccentric engineer Dr. Jillian Holtzmann (Kate McKinnon), they get word of a ghost sighting at a haunted museum that is actually haunted, and from there they start their own paranormal business that Erin calls the Department of the Metaphysical Examination. Of course, we all know they will be blessed with a catchier name before they know it.

This “Ghostbusters” starts off following the same path as the 1984 original as our heroes get tossed out of the world of academia as their love of the paranormal makes them untrustworthy and frauds in the eyes of non-believers everywhere. But being cast out of “normal society” forces them to go into business for themselves, and they set up shop in an office on the second floor of a Chinese restaurant. From there, the movie takes on a tone all its own to where it cannot be considered a shot-for-shot remake.

I found myself laughing a lot as the jokes came at a rapid pace, and if the pace ever slackened the actresses were quick to pull it back up. My only real issue with the humor is that it threatens to be too broad throughout. The 1984 original was very funny, but it was nowhere as broad because Reitman kept the characters grounded in a reality that separated them from the ghosts they pursued. Director Paul Feig doesn’t have that same success here as things are played up a little too much. Still, I can only complain about that so much.

Many are still apoplectic about this being an all-female “Ghostbusters” movie as if it were some of sacrilege that should be hidden from moviegoers everywhere. Frankly, the gender reversal is welcome as it gives this reboot an energy and a freshness it would not otherwise have. It was also a smart move not to have them playing the same characters from the original as those actors are irreplaceable.

Now let’s talk about this cast as they are not just female; they also have names. You really can’t go wrong with “SNL” veterans like Kristen Wiig, Kate McKinnon and soon to be 5-timer “SNL” host Melissa McCarthy. Wiig brings her wonderfully unique sense of humor to Erin Gilbert and combines it with a vulnerability which gives us a vivid picture of the rough childhood Erin had to endure. McCarthy remains a comedic fireball, busting down everything in her path for the sake of a good joke. And then there’s McKinnon brings that same crazy energy that makes her impersonations of Hillary Clinton and Justin Bieber so hilarious to the role of an engineer who seriously loves her work.

Also in the cast is Leslie Jones who steamrolls her way into becoming a Ghostbuster without any hesitation. As her work on “SNL” has proven, you better stay out of her way if she has a good punchline coming. Her street savvy character of MTA worker Patty Tolan is more than just the female Ernie Hudson of this movie. Jones makes her an unapologetic hero ready to do battle with ghosts dumb enough to get in her path. That is, unless one of those ghosts is resting on her shoulders.

But as terrific as this cast is, they almost get upstaged by Thor himself, Chris Hemsworth. He is simply hilarious here as Kevin Beckman, the Ghostbusters’ receptionist who is as sexy as he is dim-witted. Hemsworth proves to have great comic chops, and he steals every scene he has as he fumbles about his duties while trying to look cool. Be sure to stay through the end credits as he leads the NYPD and the FBI in a most hilarious dance sequence.

Feig peppers “Ghostbusters” with a number of artifacts from the original, and even the 1984 cast (with the exception of Rick Moranis) took the time to cameo in it. Still, he manages to make this “Ghostbusters” stand on its own. It has terrific special effects which look even better in 3D (I can’t believe I just said that), and even Slimer makes a return to the franchise and has a blast at everyone’s expense. The only other issue I have is with the movie’s villain, Rowan, a geeky hotel clerk and an occultist eager to open a portal to the ghost dimension. Neil Casey does good work, but Rowan is nowhere as threatening as Zuul, Gozer or even that old dude in the painting from “Ghostbusters II.” Had this movie featuring a more dangerous and despicable villain, it would have been even better.

There’s no way this “Ghostbusters” could have equaled or surpassed the original in terms of laughs or freshness, but I pretty much considered that a given when I sat down to watch it. All that matters is that this movie is a lot of fun and I think kids will get a huge kick out of it as well. In a dreary summer season where most blockbuster movies have failed to deliver, this one delivers enough to keep us riveted to our seats. For those who still fear that this reboot will “rape” your childhood, stop saying that. No one can rape your childhood, not even George Lucas.