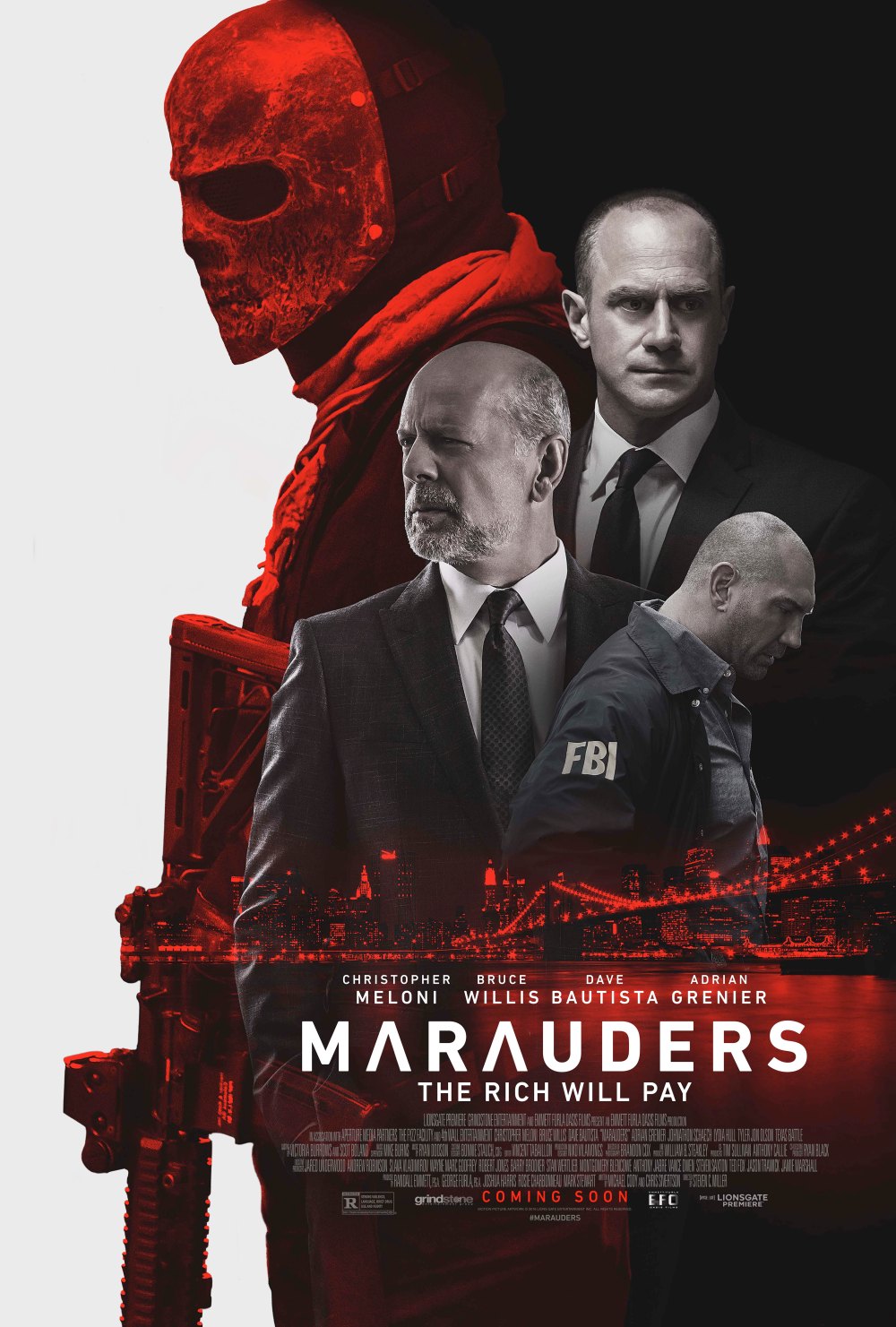 Watching “Marauders,” I kept wondering how this movie even went into production as the screenplay needs a lot more work. It does have some strong action scenes and the cast for the most part does good work, but the plot becomes so amazingly convoluted that it didn’t take long for me to give up following what was going on. Perhaps the filmmakers wanted to keep you guessing as to who was up to what, but you have to give a damn about the characters for that to work. What we have instead are cardboard cutouts from every other cop drama ever made, and they occupy a movie too brutal and nihilistic to be the least bit enjoyable. 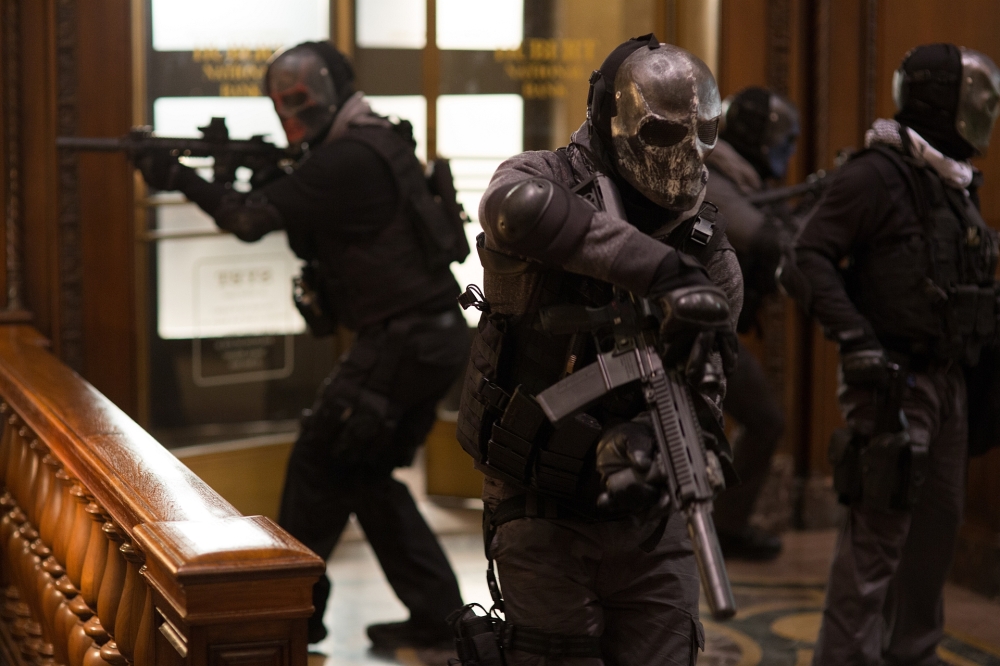 The movie starts off with a bank robbery where the thieves wear these scary looking masks and use a Siri-like device to give orders to the customers and employees. It’s actually a very clever setup as it looks like these thieves have done their homework and have succeeded in covering their tracks. At the same time, “Marauders” announces loudly, thanks in part to a booming industrial film score by Ryan Dodson, that it is going to be a brutal ride. It’s brutal alright, but brutal doesn’t automatically equate to entertainment.

From there we meet a group of FBI agents played by Chris Meloni, Dave Butista and Adrian Grenier who study the crime scene the way cops and FBI agents do in movies and the evidence points to the bank’s owner, Jeffrey Hubert (Bruce Willis), and his high powered clients as the culprits. Jeffrey treats things and people the way he runs his bank, in an exceedingly cold fashion. Oh yeah, Meloni’s character is a widower who still plays around with his wedding ring and listens to voice messages his wife left him. Grenier plays a newbie to the FBI team, so of course he’s going to be seen as the rookie who has yet to learn how things really work in law enforcement. As for Butista, he plays a seen-it-all kind of guy whose work has long since wiped the smile off his face. You know, it’s the usual cast of characters.

Perhaps I am asking too much of “Marauders” or came into it expecting a fresh take on the heist movie. A movie like this isn’t required to reinvent the genre, but it would have helped if the plot made the least bit of sense or gave us characters who you give a damn about. The term marauder refers to a person involved in banditry, piracy, looting, robbery or theft, and after a while it seems like everyone here is one whether they wear a mask or not. Alliances keep shifting to where the screenplay has plot holes as big as the sinkhole which recently opened up on Contra Costa Boulevard in Northern California.

Then there’s Bruce Willis whose career continues to take a nosedive as he has been reduced to appearing in VOD releases like this, “Precious Cargo,” “Vice” and “Extraction.” Looking at his face, he seems so disinterested to even be in “Marauders” to where I can’t help but think he did this film just for the money. Heck, he’s barely even in it and is only top billed because he is still considered a big time movie star. Is there anything notable to say about Willis’ appearance here? Well, he does have some hair on his head for a change…

For what it’s worth, Meloni does turn in a strong performance as the widowed FBI agent Jonathan Montgomery. It’s a role not unlike the one he played for years on “Law & Order: Special Victims Unit,” and he gives Jonathan a gruff don’t-mess-with-me demeanor that few are foolish to question or challenge. It’s also cool to see Bautista here as he proves that there is more to him than just being another action hero or a Bond villain. As for Grenier, he’s also good even though his character is essentially a Johnny “Point Break” Utah wannabe who you know is going to mess up on the job at least once. 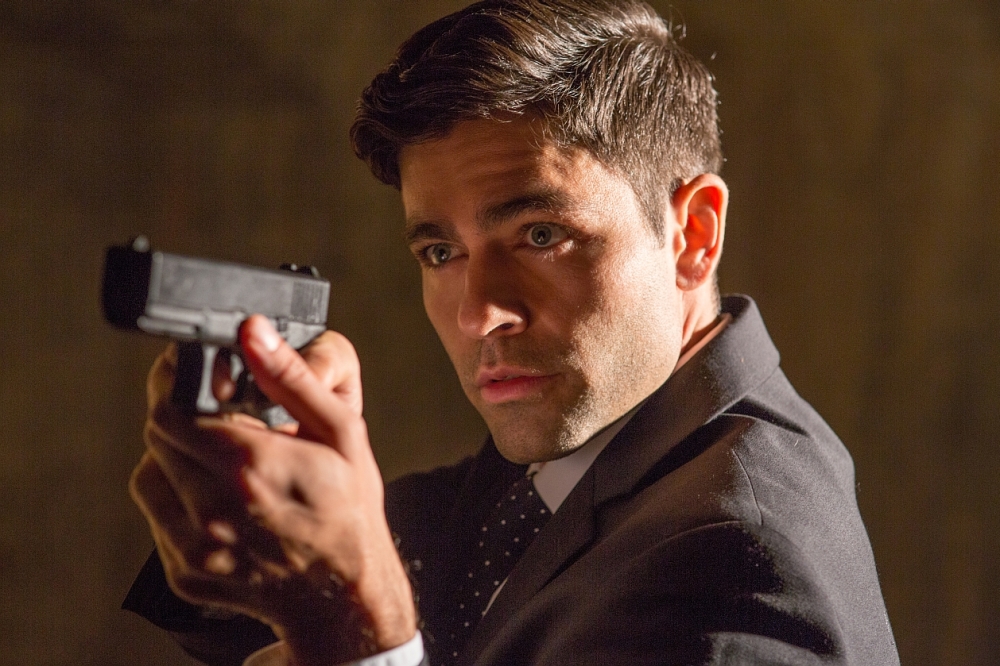 But good performances are not nearly enough to save this mess of a movie which goes in all sorts of directions without ever reaching a satisfying conclusion, and the tone is so vile that there’s not much enjoyment to be had. Director Steven C. Miller may have wanted to pay homage to all the great heist movies like Michael Mann’s “Heat,” but it never comes close to reaching greatness. Instead, it leaves a vile aftertaste and you come out of feeling very unclean. A good long shower is mandatory if you bother to sit through this whole thing.

Seriously, “Marauders” is the equivalent of all those straight to video movies that used to pop up at the video store all the time, but it’s not even enjoyable on a “so good it’s bad” level. One has to wonder if Lionsgate had any interest in making a good heist movie when the script for this came along. Perhaps they figured that with stars like Willis and Meloni, the movie would turn a profit even if people hate it. Then again, movies like this one do have “don’t bother” written all over them, so hopefully its target audience will watch “Captain America: Civil War” for the seventh time instead.