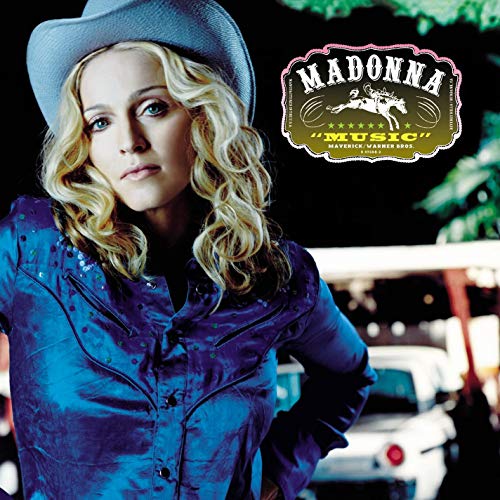 After the memorable introspection of “Ray of Light,” Madonna headed back to the dance floor with “Music.” It’s a throwback of sorts to her first few albums as she gets her listeners excited about her just like they did when she made her breakthrough into popular culture. While she works with her “Ray of Light” producer William Orbit on a few songs, Madonna’s chief collaborator here is Mirwais Ahmadzaï, a French producer, songwriter and one of the leaders in progressive electronica. Together, they create an album which stands on its own from what its predecessor, and it proved this queen of pop music has yet to run out of inspiration.

The title track has us hooked instantly as she celebrates the power of music and how it brings us all together. This is Madonna at her most upbeat, and the song’s tempo never lets up. She’s out to dance up a storm with her “baby”, which made sense since she became involved with film director Guy Ritchie whom she would later marry (and later divorce). Many out there will continue to scream out how Madonna’s music career is all but finished, but from the start of this album she lets you know this is not the case, and how dare you think otherwise.

With William Orbit, she worked on three of the album’s songs: “Runaway Lover,” “Amazing” and “Gone” (which was also produced by Mark “Spike” Stent). “Runaway Lover” is a dance tune fueled by a propulsive beat which sounds so different from anything on “Ray of Light.” Neither artist is focused on achieving musical perfection this time around, but are instead determined to let their emotions and passions flow out without any attempt to quell them for the benefit of the easily bothered.

On “Amazing,” both Madonna and Orbit get introspective as she becomes enraptured by a lover she can’t quite tear herself away from. Through the electronica, we go through the tumult of emotions we experience when we find that one person we feel is meant for us. With “Gone,” she sings with sheer conviction about how she will not compromise herself by selling out or abandoning what she was brought up to believe in.

With Mirwais, she finds a new musical direction, and two follow up the title track with “Impressive Instant.” This album could have easily peaked with the first song, but he and Madonna increase the tempo and get our adrenaline running even faster with this dance track. Still, not all of Mirwais’ contributions to Madonna are confined to the realm of electronica. He captures Madonna in a moment which feels purely honest with “I Deserve It.” However you perceive Madonna as an artist or a person, she makes us believe she deserves that one loving relationship which had long eluded her.

On “Nobody’s Perfect,” Madonna makes us see she is perfectly aware of her own flaws and that she’s just doing her best. Even with all the fame she has acquired through decades of work, there’s still a part of her which is never fully satisfied. Mirwais does even better with Madonna on “Don’t Tell Me” as she is pleasantly defiant against those who attempt to crush her desires. Madonna is determined to live life on her own terms regardless of what others think.

But the album’s best song is “What It Feels Like for a Girl” which deals frankly with the men’s shameful misperceptions of women. Whereas some feel a girl being a guy is no big thing, a guy being a girl just seems flat out wrong to so many and for no justified reason. Opening with dialogue spoken by “Antichrist” actress Charlotte Gainsbourg from the film “The Cement Garden,” Madonna confronts this senseless contradiction head on. But instead of being overly aggressive like the music video it inspired, she and Mirwais create a really beautiful song that gets to the issue by giving us a soothing melody which puts us in a euphoric state. Not once does she try to bang us over the head with how absurd our attitudes to sexual orientation are, but instead make us see those absurdities in a rather calm fashion.

With “Ray of Light,” Madonna set the bar very high for herself, and it felt like her next album would not even compare. But she has constantly surprised and enthralled us throughout her career, and “Music” proves to be a strong follow up containing memorable songs and strong introspection. It’s not better than its predecessor, but it remains one of her best albums from the first decade of the new millennium. Almost 20 years after its release, it remains as tuneful as ever. 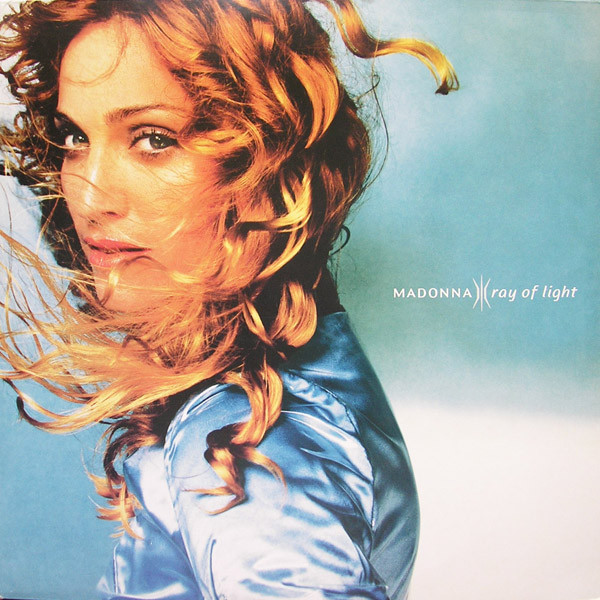 20 years after its release, “Ray of Light” remains my favorite Madonna album ever. Those which came after it had their merits, but this one is unforgettable in how the famous singer gets personal about the changes she was going through in life. Recorded after she did the film version of “Evita” and before she got married to film director Guy Ritchie, “Ray of Light” captures her as she enters the most important role of her life, being a mother.

When Madonna gave birth to her first child, a daughter named Lourdes, the media went into their typical frenzy and called it one of the best career transformations ever. But in the opening track of “Drowned World/Substitute for Love,” she is at her most personal in describing how unfulfilling the realm of fame is for her. It certainly pales in comparison to her becoming a mother, a role she always wanted to take on in real life. Listening to her here and on another track entitled “Little Star,” there’s no doubt of how seriously Madonna takes the role of being a mother. Her own mother passed away when she was very young, but she sounds determined to be there for her daughter no matter what, and to never leave her while she is young.

Madonna worked on “Ray of Light” with noted English musician William Orbit who is well known for his contributions to the world of electronica music. This allowed Madonna to go in a different musical direction and not repeat herself, and this is one of the things we love about her. Her pop music aesthetic melded wonderfully with electronic music to create seductive and enticing beats which made me want to listen to this album over and over again.

The most popular song is of course the title track which is one of her most energetic songs ever. Fueled by a propulsive beat which never lets up, Madonna sounds like she has found a new thrill out of life, and it excites us for her to take us on her journey as a result. This remains one of the most memorable songs on any album she has ever done.

“Ray of Light” also has a brilliant seductive quality to it thanks to songs like “Candy Perfume Girl” and “Skin.” The soothing sounds of these tunes put us in a welcome state of ecstasy which we live to experience. This is Madonna at her most alluring, and Orbit’s electronic music puts us in the right frame of mood for it.

Another memorable song from this album is “Frozen.” This is a most emotionally piercing love song as it describes someone who is not as emotionally open as they should be in a relationship. It’s moving and has lost none of its power in making us aware of what it takes to keep the bond we have with our significant other growing.

Other songs like “The Power of Good-Bye” and “To Have and Not to Hold” illustrate the emotional damage brought about by a breakup. Anyone who’s been through it knows how it feels, and Madonna captures the shattering emotion it produces to memorable effect. These are among the more solemn tracks on this album.

“Little Star” is a song which is sung directly to Madonna’s daughter, Lourdes, who was barely a year or two old when this album was released. Now when musicians sing songs to their just born children, they can seem either incredibly moving or unforgivably cheesy. Tommy Lee overdid it on Motley Crue’s “Generation Swine” with a song about his son Brandon, but the late Scott Weiland fared better when he sang “A Song for Sleeping” which is on Stone Temple Pilots’ “Shangri-La Dee Da” album. Madonna manages to find the middle road between those songs with this one, and the end result feels very honest and to the point.

In many ways, Madonna’s “Ray of Light” has a timeless quality which makes this album as popular today as it was upon its release. Many of her other albums such as “Like a Virgin” or “Erotica” have not fared as well because they were of a certain time which has long since passed us by, but this particular record shows her at a moment of total vulnerability we will never forget her going through. Even after all these years, it remains her most compelling album.