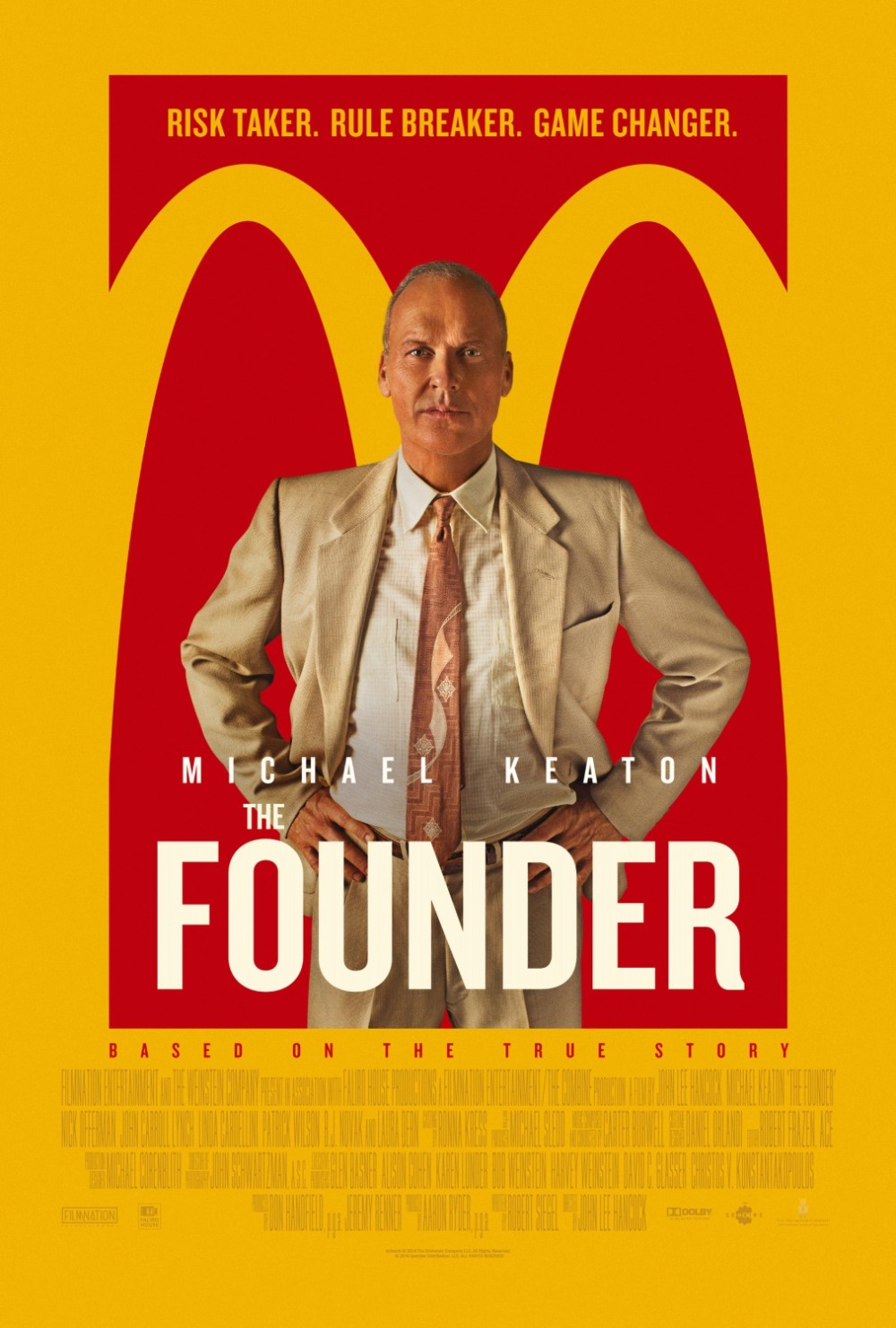 Watching Michael Keaton as Ray Kroc, the man who acquired McDonald’s and turned it into a billion-dollar franchise in “The Founder,” reminded me of his role as Hunt Stevenson in “Gung Ho.” Granted, there’s a number of fast-talking characters from Keaton’s long resume which could have come to mind, but “Gung Ho” proved to be one of my favorite Ron Howard films. Like Hunt, Ray is eager to convince everyone around him he knows what’s best for everyone, but while Hunt’s efforts are altruistic, Ray’s speak more to the kind of capitalism which is very unrestrained. Either way, you know you have the right actor portraying someone eager to get things his own way or no way at all.

“The Founder” is, yes, “based on a true story,” but we don’t even need to be told this because it is far too easy to invent a character like Ray Kroc these days. The movie opens up in the 1950’s when Ray, a salesman from Illinois, is trying to sell milkshake mixers to drive-in diners and failing to do so. While his face is filled with confidence, his mind is being subjected to countless scores of rejections as failure haunts him at every corner. As we watch Ray alone in his motel room, listening to a self-esteem record where a narrator talks about the importance of confidence, we see him desperate to outrun failure as he is now in his 50’s, a time where most men hang it up and enter retirement (back in that decade anyway).

Then one day, Ray comes across a little hamburger stand out in San Bernardino, California called McDonald’s. Immediately, he is stunned and amazed by the speedy system its owners have come up with which produces high quality food in a very short period of time. Upon taking the brothers who own the restaurant, Mac (John Carroll Lynch) and Dick McDonald (Nick Offerman), out to dinner, he soon offers to turn their restaurant into a bona fide franchise. From there, we know it’s going to be an interesting ride, albeit one filled with countless speed bumps and strong disagreements.

Now it would have been far too easy for the filmmakers to vilify Ray Kroc as he essentially stole the McDonald brothers’ business right out from under them, but director John Lee Hancock and screenwriter Robert Siegel have more on their minds than reducing this man to a mere villain. From the start, we see the desperation on Ray’s face as he is at the age where most men retire, but he still sees the potential of success waiting for him regardless of how many road blocks get put up in his path. His fear of failure becomes the driving force behind his business decisions, and while it eventually reveals him to be ruthless in his quest for dominance, we can certainly understand where the drive comes from.

The role of Ray was made for Keaton, and it’s impossible to think of another actor who could have played this businessman as effectively as the “Birdman” actor does here. It fits perfectly into his talents as a fast talker and as someone who can convince you he is on your side even when the character he plays is not. As portrayed here, Ray is a complex character whose motivations are controlled by desperation and fear of failure, and Keaton nails every complexity perfectly to where we are completely sucked into Ray’s realm of business dealing even as Ray begins to take credit for things he did not create.

I also admired the portrayal of the McDonald brothers as they are shown to be decent Americans who struggled with failure themselves until they found success with their little hamburger stand. It should be noted that the brothers were never uninterested in turning McDonald’s into a franchise (early attempts to do so did not work out for them), but were instead interested in a form of capitalism which allowed them firm control over the quality of food and service at each restaurant to where they could make a healthy profit and live comfortably without trying to overrun their competition.

It also helps that “The Founder” has two terrific actors portraying Mac and Dick McDonald in John Carroll Lynch and Nick Offerman. Lynch, in particular, has one incredible scene which involves him going into a five-page monologue where he vividly describes how the first McDonald’s restaurant came into existence. It’s an exhilarating moment to watch as the creation of this now globally dominant fast food chain reminds us of the greatness of America as it is a country where just about anyone can succeed in business if they try really hard enough and are persistent as well.

Laura Dern also shows up as Ray’s long-suffering wife, Ethel. Now this could have been a thankless role as we mostly see Ethel staying back at home while Ray is on the road trying to make a sale, but Dern makes the most of it as she shows how Ethel represents the kind of life anyone else would be satisfied with. Dern never portrays Ethel as a constant whiner, but instead as a sympathetic person who struggles to support and understand her husband, a man whose appetites extend far beyond the dining room table and evenings out at local social events.

There’s also strong support on hand from actors like Patrick Wilson, B.J. Novak, Ric Reitz, Justin Randell Brooke and Wilbur Fitzgerald who play characters that come to inform Ray’s business interests, interests which soon evolve into infinitely greedy ones. Another great stand out is Linda Cardellini as Joan Smith, the woman who would eventually become Ray’s second wife. Cardellini is fantastic as she sees in Ray a strong ambition which she wants to help advance, and she proves to have a strong chemistry with Keaton right from the first moment he spots her playing the piano.

Most of Hancock’s movies, “The Blind Side,” “The Rookie,” “The Alamo” and “Saving Mr. Banks,” have dealt with true-life stories, and like those movies, “The Founder” conveys these stories in a way which feels remarkably down to earth. No one involved in this motion picture gets overwhelmed by the iconography of McDonald’s or the people involved in its making and its dominance, and it makes for a deeply involving cinematic experience. Hancock gets all the period details down perfectly to where we are believably transported back to a time where it seemed unthinkable to eat any meal without the use of silverware.

In some ways, I wished “The Founder” had dug even deeper into its subject matter to where the McDonald brothers were included more in the story, but it is still a compelling motion picture which makes the term “based on a true story” feel like it means something for a change. I also love how it is a movie which cannot be boiled down to one sentence. It deals with many things like the American dream, business, greed and the cost of success to a fascinating degree. But looking back, it is primarily about capitalism and of how it can be both good and bad. And considering how capitalism has become such an unrestrained thing to the detriment of many, it makes this movie all the timelier as it shows where capitalism in its most dominant form was born, and Gordon Gekko isn’t even in it.

“The Founder” ends with footage of the real Ray Kroc as he explains how McDonald’s came into being, but in his own way. Many things can be said about Ray as the final image of him in front of a McDonald’s restaurant leaves us in silence as he clearly claimed something which wasn’t even his to begin with. Then again, would it have become such an enormous enterprise without him? It’s hard to say otherwise.

Click here to read what Michael Keaton, Laura Dern, and John Carroll Lynch have to say about “The Founder.”