English filmmaker Mike Leigh, the man behind such masterpieces as “Secrets & Lies” and “Naked,” takes a stroll back in time with “Mr. Turner.” It stars Timothy Spall who gives one of the very best performances of 2014 as J. M. W. Turner, the landscape painter who became famous for his work in the 1800’s during the Romantic period. But as brilliant an artist as Turner was, he was also a controversial figure due to his eccentric behavior. He was full of great passion and could be very generous, but he was also quite selfish and anarchic. Leigh’s movie looks at the different aspects of Turner’s personality and how it came to inform the paintings which he became remembered for.

One of the things which really struck me about “Mr. Turner” was how fully Leigh sucked us into the time period of the 1800’s to where it felt like we were really there. From start to finish, it never felt like I was watching a movie but experiencing something very unique. Now there have been many period movies in the past few years but watching “Mr. Turner” made me realize how artificial many of them have been. They take you back in time, but there’s something very modern about their presentation which reminds you that you’re just watching a movie. This made me wonder how Leigh had succeeded in taking us back in time so effectively with this film. 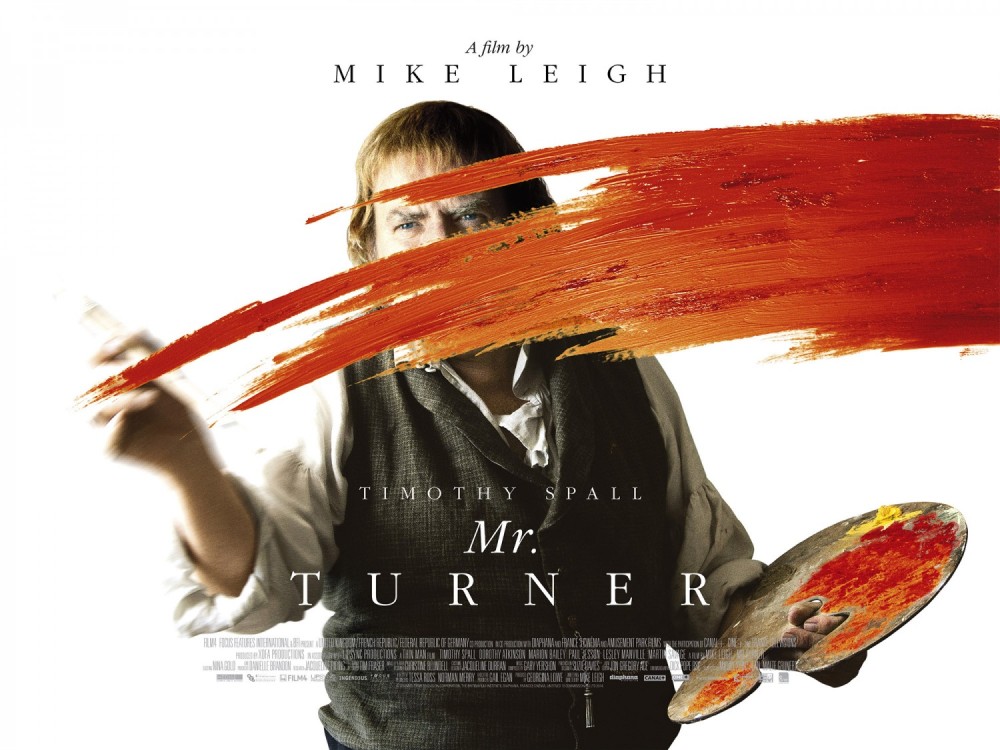 I got the chance to ask Leigh about that while he was at the Four Seasons Hotel in Los Angeles, California. In describing how he perfectly captured the period “Mr. Turner” takes place in, he pointed out why authenticity is missing in so many other movies these days.

Mike Leigh: Well to be honest with you, apart from anything else, this is a function of strong views I have about period films. You get any number of period films where they say, let’s not have period language. The audience can’t deal with that. Let’s make it contemporary then the audience can access it. Let’s not make the women wear corsets because it’s not sexy, etc., etc., etc. Now the principle here with this film and with “Topsy-Turvy” and with “Vera Drake” which was also period but here not least is we said okay, let’s do everything we can in every aspect from the performance to the language to the frocks, to the props, to the places, to everything and to make it really possible for the audience to feel they have got into a time machine and have gone back and experienced it. Okay, there’ll be things people say that’s strange and you don’t quite get (what they’re saying), but that doesn’t stop people getting what that means. In fact, that smell of antiquity in some way makes it all the more plausible. I can imagine Hollywood executives being pretty twitchy about the pig’s head being eaten, but that’s what they did.

I keep thinking about “L.A. Confidential” which took place 1950’s Los Angeles but of how its director, Curtis Hanson, didn’t let the actors be governed by the period it took place in. Granted, the contemporary feel didn’t take away from that movie, but that’s the exception. With “Mr. Turner,” Mike Leigh shows us we don’t have to give every period movie a contemporary feel, and this is what makes it such a brilliantly vivid movie to watch. You come out of it feeling like you lived through part of the 19th century, and very few filmmakers can pull off such a feat these days even with the biggest of budgets.

“Mr. Turner” is now available to own and rent on DVD, Blu-ray and Digital.