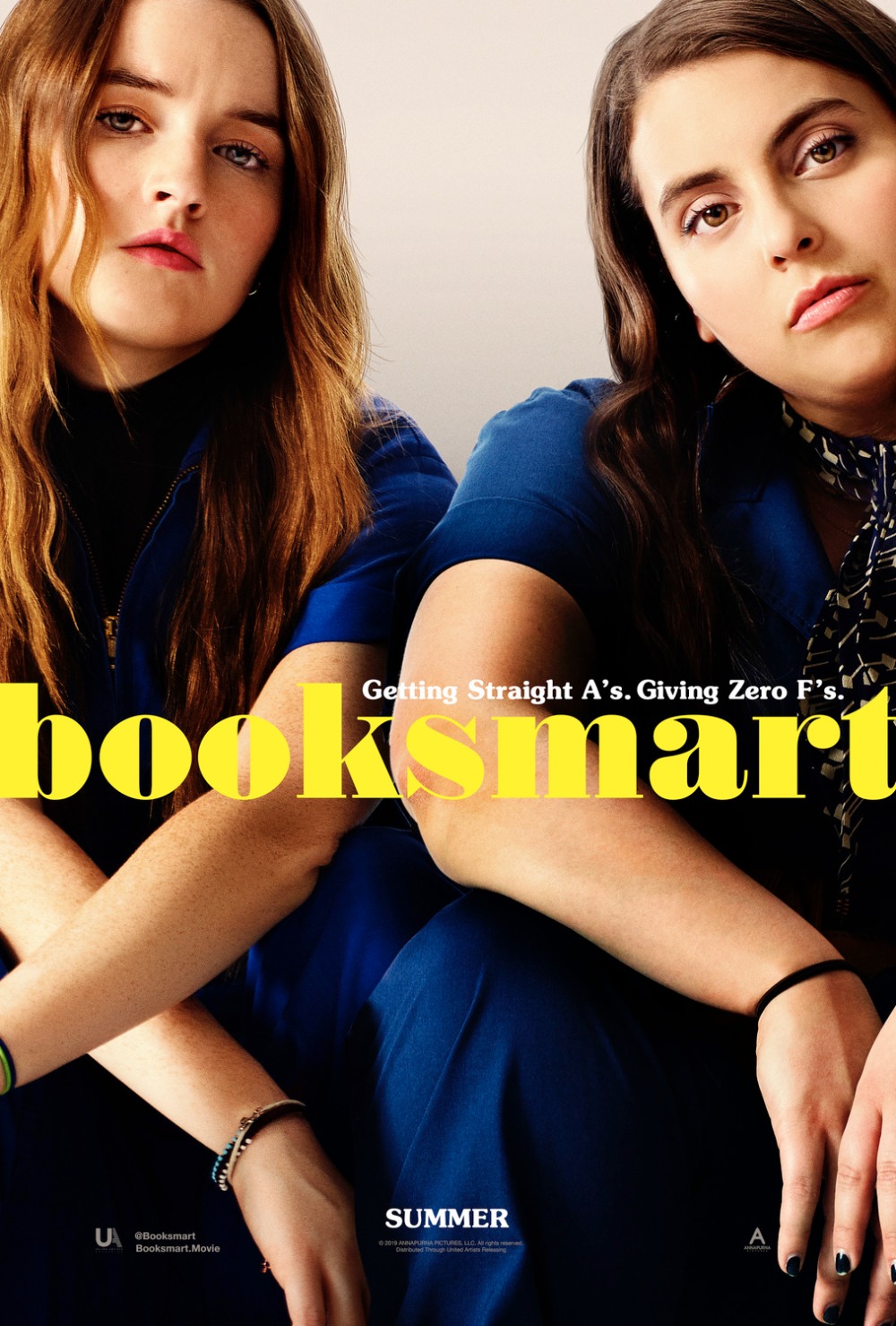 Looking back at my high school days, I wonder if I got into enough trouble as a kid. I was a good kid for the most part, a pretty good student, and was and still am a firm believer in karma. Still, a lot of my fellow classmates who constantly got into all kinds of mischief, some of which involved police involvement, seem to be doing much better in life than me. The other day, I read an article about how the kids who were really into heavy metal back in the 1980’s have since turned out to be well-adjusted adults. Perhaps if I had discovered Metallica in elementary school instead of high school, I would feel well-adjusted as well. Besides, neither Megadeath nor Motley Crue came even close.

I bring this up because these thoughts went through my head as I watched “Booksmart,” an American coming of age comedy which has at its center two females who have been best friends since childhood and are now one day away from graduating high school. They have been model students, paid far more attention to their studies than partying, and they have since been accepted to some of the best colleges America has to offer. But with one day of high school left, they begin to wonder if they haven’t fooled around enough in the past four years. What results is a film which has been described as a female “Superbad,” and it is one of the best coming-of-age films I have seen in some time.

It is made clear from the start how best friends Molly Davidson (Beanie Feldstein) and Amy Antsler (Kaitlyn Dever) have spent more time studying these past four years than they have getting wasted every other weekend. Molly is the student body president, but she is nowhere as popular as the vice-president, Nick Howland (Mason Gooding), who only went for the position because it involved planning parties. Amy came out as gay two years ago, and she is harboring a huge crush on fellow classmate Ryan (Victoria Ruesga) which could go unrequited. But while they have accomplished so much, these two young women are typically spurned by their fellow classmates as being too pretentious.

Molly ends up convincing Amy to go to Nick’s party, the biggest end-of-the-school party of all, after she makes a shocking discovery. While she and Amy have gotten into good schools, Molly discovers her fellow classmates who looked to have been partying their scholastic years away have also gotten accepted to prestigious institutions as well. How is this possible? Well, Molly isn’t sure, but she sees this party as their last chance to have the fun they somehow denied themselves during their time in high school.

Like many great movies, “Booksmart” isn’t so much about the destination as it is about the journey. Molly and Amy’s determination to get to Nick’s party is quickly thwarted by the fact they have no idea where it is. As a result, they are forced to endure detours to other parties they did not plan on going to, cell phones which are quickly drained of all their energy, and teachers who either have unexpected side jobs or have forever sworn off drinking certain smoothies from Jamba Juice.

“Booksmart” marks the feature directorial debut of Olivia Wilde, an actress as strikingly intelligent as she is fiercely beautiful. She has said “The Breakfast Club,” “Fast Times at Ridgemont High,” “Dazed and Confused” and “Clueless” served as inspirations for this film, and she has taken the best parts from each of them and created something which feels wonderfully unique. It has many laughs and heartbreaking moments which we can all relate to as, regardless of the advances in technology, our high school years were always emotional battlefields which left us with psychic scars which never fully heal.

Along with a cleverly crafted screenplay by Emily Halpern, Sarah Haskins, Susanna Fogel and Katie Silberman, Wilde takes the time to explore the various personalities high school has to offer, and of the cliques they have long since been consigned to. But as the story goes on, these same individuals get a chance to peel back the façade given to them by their classmates to where we see people trying to survive these rough and tumble years as rumors about their supposed behavior still spread like wildfires which can never be easily put out. It’s moments like these I always cherish in high school movies as no one is ever what they appear to be on the surface, and this is what I think “Booksmart” is truly about; looking past what you think you see to discover what is really there, and making us see we are all the same.

Both Davidson and Antsler are perfectly cast as Molly and Amy to where they make you believe they have been best friends forever. We root for them as they look to live their last night as high schoolers to the fullest, and we feel for them as they eventually realize they may never see each other again for the longest time after this year is over. And yes, the two have a tense confrontation when they reveal truths which should have been confronted ages ago, and Wilde sticks the knife in deeper by muting their conversation as the looks on their faces is enough to illustrate the painful truths and grudges which have now forced their way to the surface.

Another memorable performance comes from Billie Lourd as Gigi, a gleefully blissed-out individual who somehow shows up at every high school party Molly and Amy are at. She is a riot throughout and inhabits her character with such wonderful abandon to where I believe Silberman when she said extra scenes were written for Lourd as everyone was really impressed with her performance.

In addition, there are some nice cameos from Will Forte and Lisa Kudrow who play Amy’s parents and have prepared a dinner with food names which need to be heard to be fully appreciated. Jason Sudeikis has some choice moments as school principal Jordan Brown who shows up unexpectedly throughout the film. And Diana Silvers has some strong scenes as Hope, a seemingly mean school girl who eventually lets her poker face down.

Wilde also has wonderful collaborators in Dan the Automator who composed the energetic film score, and cinematographer Jason McCormack who gives the visuals a reality we can relate to as well as a fantastical quality when our heroines slip into their imaginations to where one dance sequence looks like it was shot by Benoît Debie.

“Booksmart” arrives in theaters one year after “Eighth Grade,” a film about the worst year in our lives. “Booksmart” isn’t quite as brutal as it takes place in a time when the divisions between teenagers begin to disappear as they are all about to advance to another, and more vulnerable, stage in their lives. Still, it proves to be as entertaining, thoughtful and at times as heartbreaking. While it may invite easy comparison with “Superbad,” it is by no means a gender reversed remake of it. I don’t know how many out there think it is, but it is worth pointing this out here.

In a time when summer blockbusters and superhero movies reign supreme at the box office, a movie like this can get buried too easily. Here’s hoping “Booksmart” gets the audience it deserves in one way or another. And after you have watched it, you will agree that panda bears will never, ever be the same.