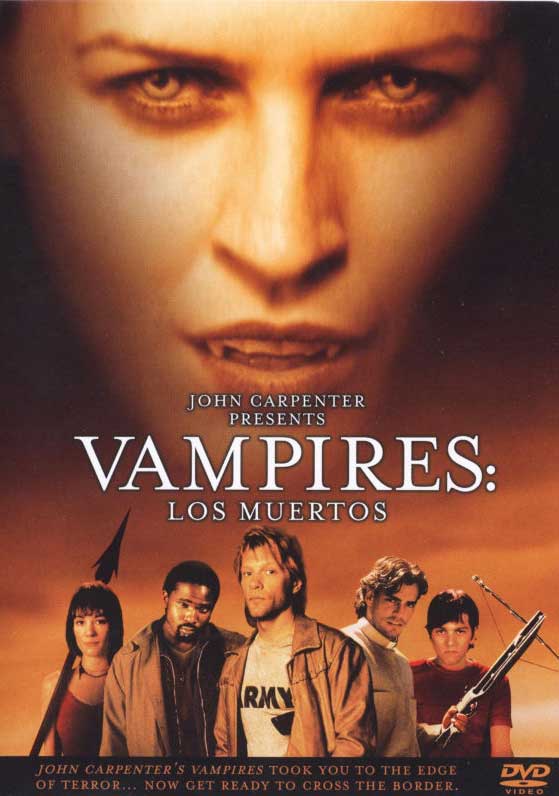 While at New Beverly Cinema on November 19, 2011 to talk about her husband John Carpenter’s movie “Vampires,” producer Sandy King also took the time to discuss its sequel “Vampires: Los Muertos.” Not many know about this one, but this is largely because it went straight to video and features none of the cast from the original. King went into detail about its making, and she summed up Screen Gems handling of it by saying, “They fucked it up!”

The original storyline for “Vampires: Los Muertos” had all the original slayers dead which necessitated that a new team be put together. Tim Guinee was set to return as Father Adam as his character was intended to be the through line for both films. Sheryl Lee was also expected to return as Katrina who had since become queen of the vampires. King never mentioned if Daniel Baldwin would be back, but I’m assuming this was not a real possibility.

The problem with this sequel, King said, was the studio thought they got the movie, but really did not. This was quickly proved when they introduced some changes during the film’s production. Guinee ended up not being brought back, and we see Father Adam’s grave at the movie’s start. Instead, they ended up casting a Mexican soap opera star named Cristián de la Fuente as a completely different character named Father Rodrigo. King was also perplexed as to why they cast rocker Jon Bon Jovi as the lead vampire hunter, Derek Bliss. Granted, Jovi is not a bad actor, but King best described him as looking like a “New Jersey surfer.”

At one point, the studio called both King and Carpenter and asked them, “Can you tell us how to fix this?” To this, King replied quite bluntly, “No.”

In the end, King made clear how the studio’s interference is what messed everything up. She said if you don’t understand the myths and legends involved in the original “Vampires” movie, then “you’re going to fuck it up.” Also, if your main villain of a female vampire is not the hottest lady, then the story won’t make a lick of sense. All of this, in her opinion, showed a lack of respect not just for the audience, but also for the genre as well.

In all fairness, “Vampires: Los Muertos” is an okay movie if you expect nothing more than a decently entertaining B-movie. Even King said director Tommy Lee Wallace, who had directed another sequel to a John Carpenter movie with “Halloween III: Season of The Witch,” did a lot of neat things which were fun to watch. I myself loved the kick ass rock and roll score by Brian Tyler who has since gone on to compose the music for “Rambo” and several of the “Fast & Furious” movies. But when all is said and done, this sequel was a missed opportunity, and it serves as yet another example of why studio executives would do best not to interfere too much, if at all, in the moviemaking process.

Movie producer Sandy King dropped by New Beverly Cinema on November 19, 2011 to talk about her husband John Carpenter’s movie “Vampires.” The website Horror Movie a Day hosted the midnight screening which brought out a small but dedicated crowd who yearned to see it on the big screen again. Carpenter once said he originally became a filmmaker to make westerns, and this movie, based on the novel “Vampire$” by John Steakley, is the closest he has ever come to making one.

Casting “Vampires” was Reuben Cannon who brought actors from all over the world to his casting office. There were even midget actors, King said, who were about 4 feet tall. Many who did get cast as blood suckers were stunt people as they had to perform the movie’s most dangerous stunts. The scene where vampires climb out of the dirt proved to be the roughest stunt of them all.

Thomas Ian Griffith was cast as the imposing master vampire, Valek. King was standing outside Cannon’s office when she noticed a shadow looming over her. It turned out to be Griffith who is actually 6’ 6” tall, and his height gave her the strong impression of a vampire. King also said on top of Griffith being tall and athletic, he could also act which made him a perfect choice for the role.

When it came to describing James Woods, who plays Jack Crow in the film, King said bluntly, “He’s nuts!” It turned out King and Woods shared the same publicist, and Carpenter was looking for a really good actor to play Jack Crow. While Woods proved difficult to cast as the studio didn’t want him in the lead, Carpenter was intent on working with him despite the actor’s reputation of being difficult to work with. The role, however, turned out to be a real physical challenge for Woods as he was not really an athletic actor at the time, something which is hard to believe after watching “Vampires.” Stunt coordinator Jeff Imada ended up helping him look as tough as he does onscreen, but King stressed Wood’s role was really about acting more than anything else.

As for the rest of the cast, King described them as “great” and “really good people.” She said Sheryl Lee, who played the prostitute Katrina, is “the most unspoiled actress ever.” Daniel Baldwin, who played Montoya and is better known for his legal problems, was not a problem according to her. In fact, when a wave of bronchial flu ended up infecting the cast and crew, she said Baldwin ended up bringing soup for everyone.

While receiving a rather middling reception when it debuted domestically, “John Carpenter’s Vampires” is a better movie than people generally give it credit for. Like many of the “Halloween” director’s films, it has gained a strong cult following years after its release, and I still find it to be wildly entertaining to this very day.

Remember John Carpenter’s “Body Bags?” It was a horror anthology containing three stories: “The Gas Station” which has a female college student working a graveyard shift and getting terrorized by a serial killer, “Hair” about a hair transplant which goes horribly wrong, and “The Eye” where a baseball player loses an eye and gets a new one from a recently executed murderer. Many see it as Showtime’s answer to HBO’s “Tales from the Crypt” as it featured Carpenter as a creepy-looking and deranged coroner who introduces the three stories while drinking formaldehyde as if it were a martini, and it looked like the start of a wickedly demented series. Was it meant to become a series, or was it simply intended to be a single movie? These questions were answered by Sandy King, the producer of “Body Bags” and Carpenter’s wife, when she dropped by Cinefamily which showed 1993 horror anthology as part of its Friday Night Frights series.

King told the audience Showtime originally wanted a 3-story movie and that it was supposed to be a one-shot movie for her and Carpenter. As soon as they were done, they would be off and running to their next project. King remarked how anthology movies were very hard to finance as they were typically not successful at the box office, so bringing one to a cable channel like Showtime made more sense. When it was finished, Showtime then decided they wanted to turn it into a series, but King explained why she and Carpenter decided against it.

“We shot it in California, mostly in Los Angeles, which allowed us to get a lot of the great cameos with Wes Craven, Sam Raimi and Roger Corman,” King said. “Showtime, however, wanted to lower the budget and shoot the series in Canada, and we felt the amount of money they were putting into was not going to be enough to get it right. Plus, shooting in Canada would have made it enormously difficult to get the cameos we got. So, we basically told Showtime thanks, but no thanks.”

“Body Bags” was in many ways a family affair as it involved King and Carpenter working with people they worked with in the past. King had previously worked with Bobby Carradine and Stacey Keach on the Walter Hill western “The Long Riders,” and she had worked with Mark Hamill as well. Peter Jason has appeared in many of Carpenter’s films, and he even used his own car for his appearance in “The Gas Station.” As for the cameos from Craven, Raimi and Corman, she reminded the audience that the horror community is a small and tightly-knit one as everyone knows each other in it.

Carpenter has never seen himself as much of an actor for those who have listened to his various commentary tracks on the movies he has done. After making a Hitchcockian cameo at the beginning of “The Fog,” felt he would be better off behind the camera instead of in front of it. Still, King said she wanted him to play the Coroner in “Body Bags” and that it actually didn’t take much to convince him. She also described Carpenter as an “inner looney” to where he allowed himself to let loose, with the help of Rick Baker’s makeup, on set. Also, Carpenter did not direct himself as the Coroner as King said a friend was brought in to handle his performance and to make sure he hit all his marks. Truth be told, casting him as the Coroner was very inspired.

The Tobe she was referring to was Tobe Hooper, director of the horror classics “Poltergeist” and the infinitely terrifying “Texas Chainsaw Massacre.” Getting Hooper to direct “The Eye” was a bit tricky as he was very disturbed by the material which had a husband attempting to kill his pregnant wife, but King told him it would be fun and that he could make it work. She also said it was fun to watch Hooper do comedy as he had a cameo at the end with Tom Arnold in which they play two morgue workers who perhaps enjoy their jobs a little too much.

It was great fun to watch “Body Bags” on the big screen and with an audience at Cinefamily, and it was especially nice to see Sandy King drop by and talk about its making and development. She even brought some Shout Factory Blu-rays of Carpenter’s movies to give away, and this writer was lucky enough to win a copy of the one for “Body Bags.” For Carpenter fans, the Blu-ray is a must as it features a great commentary track, a wonderful making-of documentary, and a trailer for the movie as well. It had been out of print for years, and the previous DVD released by Artisan Entertainment gave us a severely edited version which took out a lot of things like Craven’s inspired cameo and some especially gruesome moments. “Body Bags” may not be epic filmmaking, but it sure is a lot of fun for horror fans.