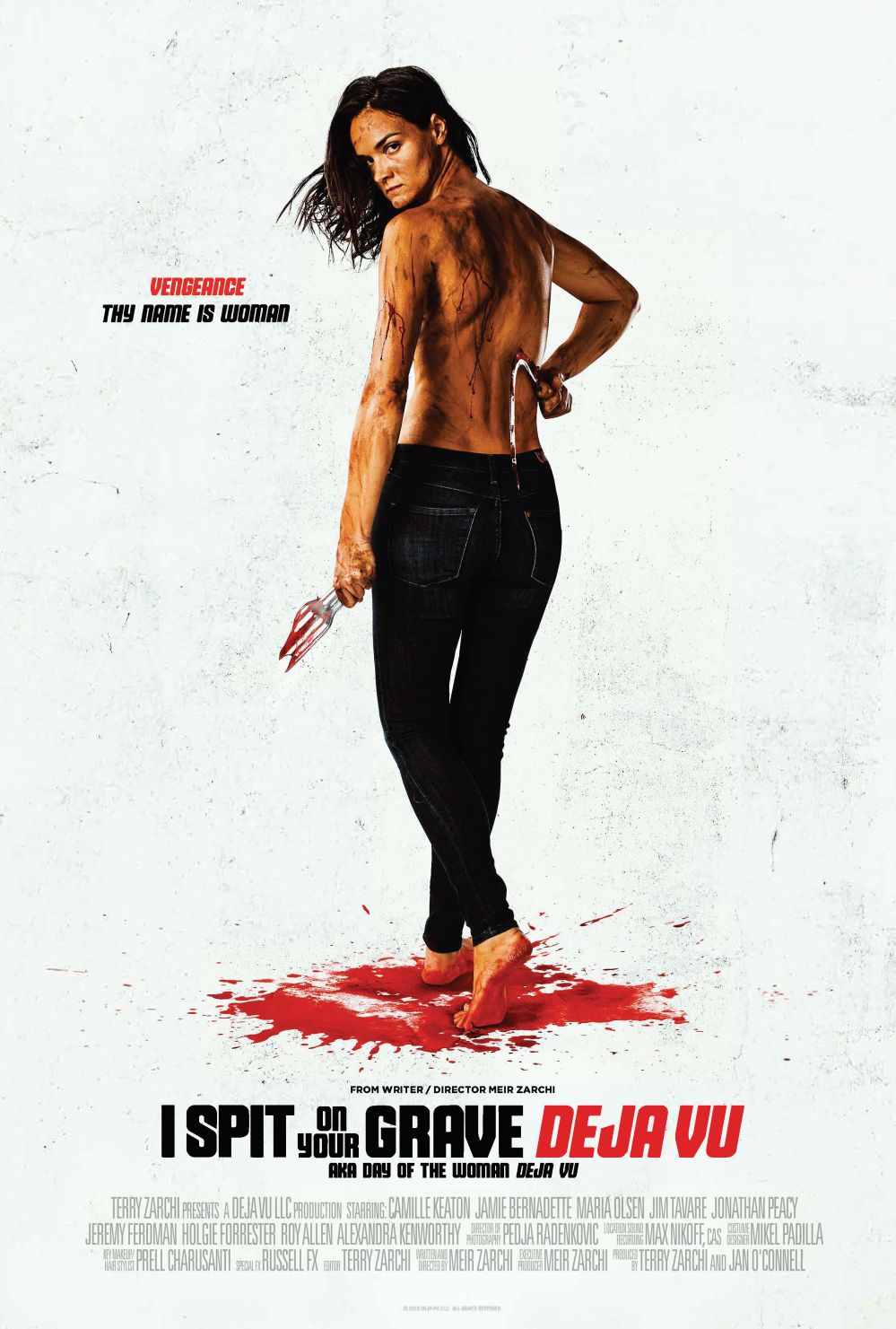 As much as I abhor “I Spit on Your Grave,” its power to shock and deeply unnerve its captive audience is something I have to admire even if I do so begrudgingly. The 1978 cult classic is like a scab which I cannot help but pick at even when I know doing so is harmful and pointless. Meir Zarchi’s controversial revenge flick was such a poorly made motion picture, and yet it maintains a raw power which would later inspire a remake and two sequels. Heck, there is even a documentary called “Growing Up with I Spit on Your Grave” which was made by Meir’s son, Terry Zarchi, and I may have to watch just out of sheer curiosity.

Now it’s 40 years later, and Meir Zarchi has given us a direct sequel to the original called “I Spit on Your Grave: Déjà vu.” Upon hearing Zarchi was going to make a follow up, I couldn’t help but be incredibly intrigued. It’s been a long time coming for this sequel as it was finished in 2015 but is only now seeing a release, albeit one which is seeing it go straight to DVD and Blu-ray. Has Zarchi improved as a filmmaker? Will it be more disturbing and violent than what came before? Could “I Spit on Your Grave: The Next Generation” be a more appropriate title?

Well, I got to check the sequel out the other week at its Beverly Hills premiere where the cast and crew were in attendance along with fans who seemed more excited for this than they are for “Avengers: Endgame.” Since this screening, I have tried to sort out my thoughts about it and will continue to do so in this review. What I can tell you is this; “Déjà vu” is infinitely better than its predecessor, features some really strong performances, and it shocks in a way which feels nowhere as exploitive as what came before. At the same time, it is widely uneven, has some actors redefining the term “scenery chewing,” and it has a running time of almost two and a half hours. Plus, as it goes on, it quickly becomes clear why it was given the subtitle of “Déjà vu.”

The movie opens with us learning Jennifer Hills (Camille Keaton) was found not guilty of killing the four men who brutally raped her, and she has since published a memoir of her ordeal appropriately titled “I Spit on Their Graves.” She meets up with her beautiful daughter, Christy Hills (Jamie Bernadette), for lunch, and we se she is a successful model who has made quite the career for herself. Both women are at a crossroads in their lives as they discuss what else they can do now they have found amazing success despite a troubled past, and the road ahead offers no easy answers.

As Jennifer and Christy leave the restaurant, they are accosted by Kevin (Jonathan Peacy) and Scotty (Jeremy Ferdman) who are eager to get Jennifer’s autograph. The fact the two men drive up to her in a white van with the words “Enola Gay” painted on the side is not a good sign as this was the name given to the Boeing B-29 Superfortress bomber which dropped an atomic bomb on Hiroshima, Japan back in World War II. Before they know it, the two women are abducted and driven far away from the eyes of the world where they meet Becky (Maria Olsen), the wife of Johnny (Eron Tabor) whom Jennifer castrated in the bathtub and left bleeding to death. Suffice to say, Becky is brimming with rage and furious at Jennifer for depriving her of a “church-going” husband and their two kids of a father, and she is intent on taking Jennifer back to the place where it all began so she can give her a “preview to hell.” In the process, Christy is forced to fend for herself after she is separated from Jennifer, and as she attempts to rescue her mother from a horrible fate, she comes to discover more about herself than she ever could have expected.

“I Spit on Your Grave: Déjà vu” is a much more professionally made movie than its god-awful predecessor, and Zarchi is blessed with an excellent cinematographer in Pedja Radenkovic who gives him a number of beautifully framed shots amid the bloody carnage we know will be unleashed in front of our eyes. He also provokes our views on religion and revenge among other things as Becky has convinced herself as well as Kevin and Scotty how her acts are justified by the word of God and the Holy Bible, and she sees Jennifer as nothing more than a vixen who used her sexual powers to lure Johnny and the other men to their ever so painful deaths. It’s both fascinating and frightening to see how people use religion to justify acts which Jesus would not condone in the slightest, and this makes this sequel feel surprisingly, and painfully, timely.

The first performance worth singling out here is Jamie Bernadette’s as she is a commanding presence throughout and manages to say so much while saying nothing at all. Just watch her stare down one of her assailants as she rocks back and forth in a chair. Not once does Bernadette have to tell us that Christy will have her revenge in a most brutal way as her eyes make this clear from the get go. Even when “Déjà vu” takes us through moments which defy all believability, this actress makes you believe certain things could be possible even when logic tells us they are not.

Then there is Maria Olsen who makes Becky into one of the most unforgettable characters I have seen in a horror film in quite some time. Even when she looks to head into, as Kevin Smith and Ralph Garmin would call it, “exquisite acting” territory, Olsen gives a fully committed performance as someone whose heart and soul yearns for nothing more than vengeance, and I can’t help but see her in some respects as a female Khan Noonien Singh. As she prays at the grave of her dead husband, I couldn’t take my eyes off of her, and even the snot hanging from her nose can’t possibly upstage her.

Okay, now let’s talk about what doesn’t work about this sequel. Yes, Zarchi has definitely improved as a filmmaker, but he needs a better editor as this movie has no reason to run over two hours long. Scenes drag on for much longer than they have any right to. Moreover, why does Becky want revenge after 40 years? I know the American legal system moves very slowly, but this slowly?

While the screenplay fearlessly provokes our thoughts and beliefs on religion and justice, it doesn’t provide much in the way of answers. Is Zarchi trying to strive for some particular meaning here? If so, what exactly is he getting at? And as we arrive at the movie’s climax, certain characters end up doing a 180 turn on us to where I came out of it questioning the logic of everything which came before. Why, why, why?

And as “Déjà vu” goes on, we come to see it is replaying the same exact story of the 1978 original as Christy is forced to endure the same fate as her mother though in a way slightly less disturbing. Didn’t any of the characters around her learn anything from what happened before, or are they far too dumb to realize the consequences of their actions? The bible does say “an eye for an eye,” but the meaning of this phrase proves to be quite infinite.

As for the other performances, they come to redefine scenery chewing. Jonathan Peacy in particular is all over the place in his portrayal of Kevin to where I wondered why Zarchi never bothered to rein him in. The actor is like a dog who gets all too excited to where he cannot stop jumping all over strangers. Regardless of how the dog’s owner tells them to get down, sit or shake hands, this dog cannot and will not contain their energy. I have to admire the energy Peacy brought to his role, but perhaps a little less caffeine behind the scenes would have done him some good.

And there is Camille Keaton who returns as Jennifer Hills. Her appearance here threatens to be nothing more than a cameo, and this for me was the most disappointing thing about this sequel. At the “Déjà vu” premiere, Keaton said she had wanted Zarchi to make a sequel to “I Spit on Your Grave” for years, and yet she only gets so much to do here. Considering how Jaimee Lee Curtis got to resurrect Laurie Strode for one of the best “Halloween” movies ever and turned her iconic character into a bad ass survivalist, I was hoping the same would happen with Jennifer Hills. In the end, this proves not to be the case.

There is a rape here, but only one thank goodness. Now that last sentence may sound strange, but considering the half hour of brutal abuse Jennifer Hills endured in the 1978 movie, this was a relief as Zarchi is far more focused on the revenge of the female this time around. There is also a castration scene you can see coming from a mile away, and it is as painful as the one we witnessed decades before. And yes, there is another mentally challenged who gets murdered even after he spares another human from certain death. Seeing him get killed off was especially frustrating as the character, Herman (Jim Tavare), proved to be more of a morally balanced individual than anyone else here, and yet he still gets it right in the back.

At some point, I may be able to view “I Spit on Your Grave: Déjà vu” as a guilty pleasure. For what it’s worth, it is a vast improvement over its notorious predecessor and a little easier to sit through even as Zarchi fearlessly and shamelessly gets under our skin. It also ends on an interesting note as one character chooses to avert a course of action we expect them to take, and we wonder if history will repeat itself again as two people who are alluded to show up unexpectedly. Still, after a time it devolves into the same old story, and many of us will be left wondering if it was one which needed to be revisited at all.

Perhaps Zarchi can make another sequel with the subtitle “Vuja De.” You remember what George Carlin said about this, right?

“Do you ever get that strange feeling of vuja de? Not deja vu, vuja de. It’s the distinct sense that somehow, something that just happened has never happened before. Nothing seems familiar. And then suddenly the feeling is gone. Vuja de.”