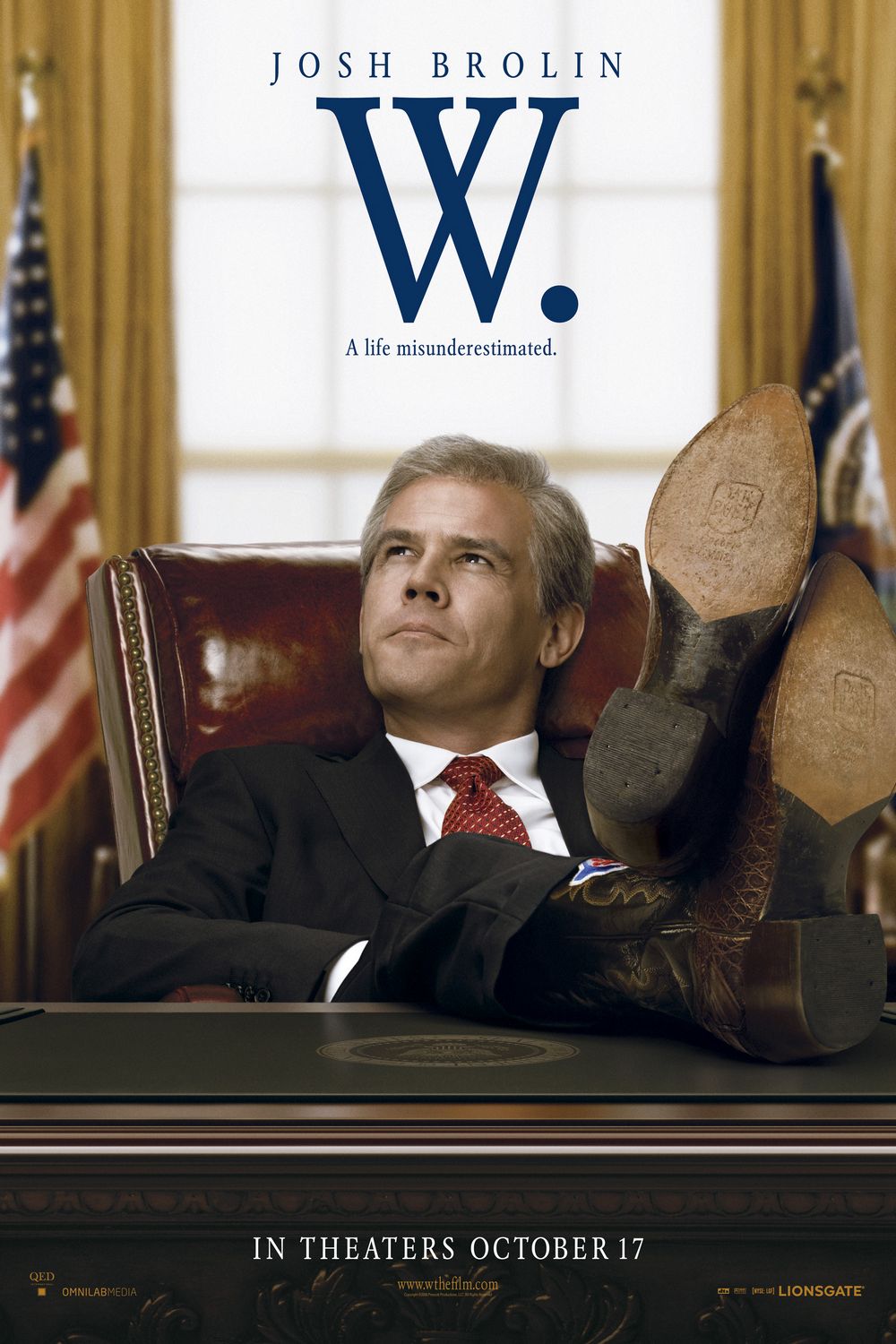 You really have to admire what Oliver Stone pulled off here as he himself has been a big critic of the Bush Administration (and who isn’t these days?). Like “Nixon,” Stone has given us an empathetic portrait of an infamous President and tears down the stereotypes we have about this particular person so we can see him up close for who he really is. It is not a Bush bashing piece, but that would have been pointless anyway because we bash George W. Bush on a regular basis. With “W.,” Stone has given us what is essentially a father-son story as George W. is a man who spent the majority of his life trying to get his father’s, President George H.W. Bush, respect. It is clear from the start Bush Sr. respects Jeb more than he who bears his first and last name, and this leads George W. to do things he would never have done otherwise, such as run for political office.

“W.” covers George W. Bush from his days at a Yale fraternity hazing to the end of his first term as President. His second term is not covered here which is just as well as we are deep in the muck when it comes to political and financial affairs. It flashes back and forth in time from when he is President to his days as a rootless young man who is unsure of what he wants to do with his life other than party and get drunk. The movie does have the feel of a comedy, but it gets more serious in other moments. The tone Stone sets here is not always clear, and it does take away from the movie a bit. Still. it kept me engrossed as it covered the life of a man I can’t wait to see leave the White House.

George W. Bush is played here by Josh Brolin, and he had a great streak last year with “Grindhouse,” “American Gangster” and of course “No Country for Old Men.” Christian Bale was originally cast in this role, but he dropped out at the last minute due to the makeup effects not working to his liking. It’s just as well because Brolin looks like a much better fit being from Texas and all. Playing Bush to a serious degree is a difficult challenge to say the least because we have long since gotten used to seeing him being lampooned on “Saturday Night Live,” and as a result, we cannot help but look at Brolin’s performance as a caricature of George W. But in the large scheme of things, Brolin manages to make the role his own, and it becomes more than a simple impersonation which was obviously not what he was going for in the first place.

In fact, Stone did a great job of casting as he got actors who don’t simply impersonate the people we know so well, but who instead embody and inhabit them. In the process, the actors force you to look at some of these personalities a bit differently than we have in the past. Getting past the preconceptions we have of people is always tough, but it is at times necessary in order for us to better understand how certain individuals, particularly those with the most power, tick.

One actor I was most impressed with here was Richard Dreyfuss who plays Vice President Dick Cheney. Dreyfuss has a great and frightening scene where, in a private conference with all the heads of state, he makes a case for attacking Iraq and Iran in order to get control over their vast oil supplies and keep dictators like Saddam Hussein from coming down on us ever again. The one moment which sent a chill down everyone’s spine is when someone asks Cheney what the exit strategy out of Iraq is, and he replies, “There is no exit strategy. We stay there forever.”

Everyone in the theater was frozen in silence as this is the one thing we keep begging future politicians to do, provide an exit strategy. Dreyfuss plays the scene not at all as a villain, but as a man who convinces the Commander in Chief of why he sees this path of action is the right one for the administration to take.

Another really good performance comes from Toby Jones (“The Mist”) who plays the master of smear campaigns, Karl Rove. Jones ends up making Rove seem both charismatic and likable, and he also subtly brings out the emotional manipulator in the man who succeeds in getting under George W.’s skin to make him the puppet he is today. I hate Rove for everything he has done, but Jones succeeds in making us admire him, begrudgingly so, for being so fiendishly clever. Rove’s powers of manipulation are ever so subtle to the point where we barely notice them, and Jones gets this across perfectly and with amazing subtlety.

As Bush Sr., James Cromwell makes us see that this particular U.S. President is fully aware of how his children are at a huge disadvantage. While he had to work hard to get to where he ended up at, his offspring had everything handed to them on a silver platter. Bush Sr. obviously wants the best for his children, but in seeing to his black sheep of a son’s needs and troubles, he comes to see he has done more harm than good.

As the movie goes on, Cromwell goes from presenting the elder Bush as being terribly disappointed in George W. to being deeply concerned over his son’s decisions about Iraq. We see Bush Sr. the end of the first Gulf War discussing his reasoning as to why they shouldn’t go after Saddam as it might make the dictator a hero in the eyes of many. Indeed, Stone makes us sympathize with the senior Bush in ways I never expected to. The moment where we see Bush lose the Presidential election to Bill Clinton, I actually found myself saddened as it comes across how there were many opportunities which would never be realized. This was shocking to me because I really wanted to see Clinton beat Bush, and I was thrilled he did.

In the end, however, the movie really belongs to Brolin who gives us a George W. Bush that is seemingly well intentioned and yet hopelessly naïve. You may not completely blame him for all the troubles going on in the world right now, but you can never excuse him for not taking more responsibility for his actions. We see Bush embrace God and become a born-again Christian, and while this helps him with his drinking problem, it also gives him blind faith which will prove to be his flaw as a person which will eventually undo him. Brolin makes Bush goofy yet well intentioned, and he makes clear the heartache he feels as he cannot escape the shadow of his famous father.

Stone’s “W.” is not the classic political movie “JFK” was, but it is effectively made and shows how we need to understand the human side of those we brand as criminals in order to get at what makes them act the way they do. This is an important lesson to remember as we go on in life.