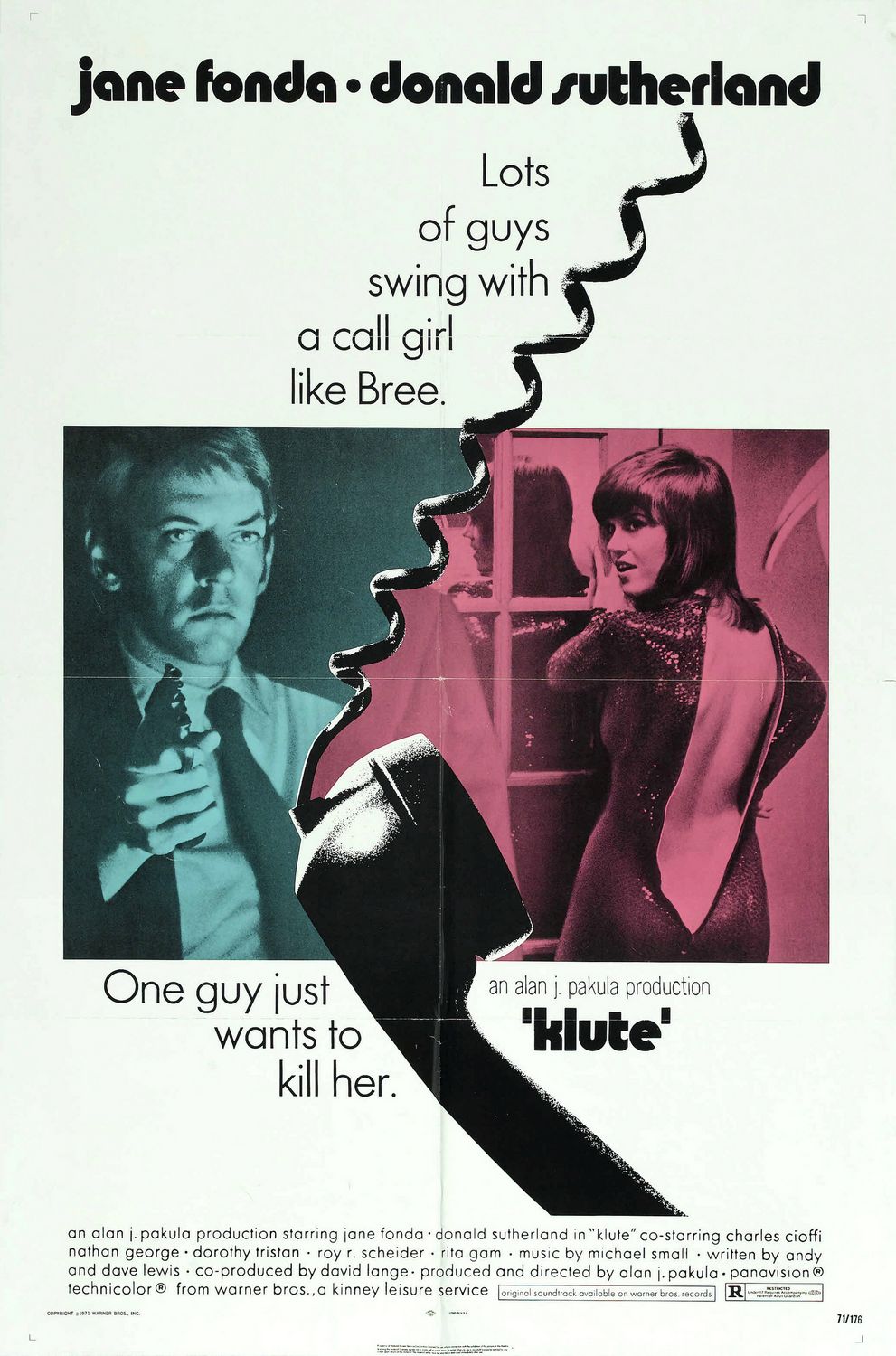 Many keep wondering what draws people, and not just women, to prostitution. It seems such a sordid profession which offers nothing but degradation and humiliation to those involved in it. Other than money, what does draw people into a lifestyle like this one which has been around for so long? From a physical point of view, it’s got to get tiresome after a while. Maybe it is appealing from a psychological point of view; people profiting off the needs and weaknesses of others may very well be its selling point. To have control over another person is always an appealing prospect.

This is made clear in “Klute” which was directed by Alan J. Pakula who had a talent for taking familiar stories and populating them with characters you can recognize from real life. The movie revolves around the case of a missing man and a private detective named John Klute (Donald Sutherland) who has been assigned to find him. The only lead he has is a prostitute named Bree Daniels, and she is played by Jane Fonda in one of her best roles.

Fonda won one of her two Oscars for her performance in this classic 1970’s thriller. It is a wonderfully complex role for an actress to play as Bree is a struggling actress and model who finds a power and control as a call girl she doesn’t have elsewhere in life. In one of several meetings with her psychiatrist, Bree admits she doesn’t enjoy the physical part, but she does enjoy the act she plays for all her clients. When she is with them, she considers herself to be the greatest actress in the world and brilliantly exploits their weaknesses to gain a higher price for her services.

Bree, however, ends up finding a different view on life with John, a man as straitlaced and upstanding as they come. Donald Sutherland has one of his best roles here, and while his character ends up succumbing to Bree’s charms, he never completely loses himself in his desires. Throughout the movie, he remains the source of hope and strength Bree needs when she finds out someone wants to kill her.

When Bree does ends up sleeping with John, she thinks she has him right where she wants him. She quickly intuits her strength over him as a result of him not making her orgasm as a weakness on his part, but later finds herself losing this power she has over men while she is with him. Bree finds she likes being with him, and this scares her because love is not something anyone can have any control over. There is a beautiful moment when she is shopping with John at a local farmer’s market, and you can see the insecurity on her face. She feels strongly for John, and it frightens her as the addiction she has for being a call girl may overwhelm her true love for him.

Pakula does a great job of increasing tension throughout “Klute,” and this is heightened by the characters being very relatable and down to earth. This has been the case with the majority of his movies like “All the President’s Men,” “The Parallax View” and even “Presumed Innocent.” Even if the plots of some of his movies seem far-fetched, it is the reality of the characters and the world they inhabit which sucks us in.

“Klute” also features another great performance by the late Roy Scheider as Frank Ligourin, a pimp disguised as a record producer. Scheider makes him unlike other pimps we have seen in “Taxi Driver” or “Street Smart” as he makes his character much more casual in his cruelty and control over those who work for him. He doesn’t deal too much in force because it doesn’t suit him well, and it would affect the relationships he has with his employees.

We do find out who’s threatening Bree early on, so the whodunit element of “Klute” disappears rather quickly. This could have really sunk the movie, but Pakula gets away with it because we find it is integral to the themes the movie explores: perversity, sexuality and the mentality behind them. Many think they are above perversity, but there is a darkness inside of us which often goes unchecked. The more we repress it, the more explosive it becomes when finally released. There are no good or bad guys in this movie, just people trying to measure out what they feel is right and wrong, and some do a better job of figuring this out than others.

“Klute” does have an anticlimactic ending, but that’s probably because the one we expect a movie like this to have would have just taken away from the reality of the story. Either way, it proves to be one of the most memorable movies of the 1970’s.