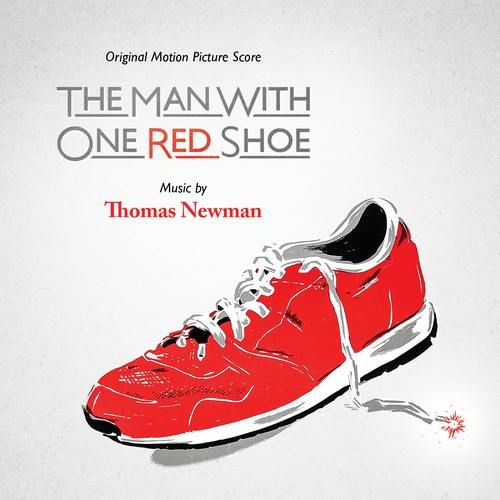 Anyone remember the action comedy “The Man with One Red Shoe” from 1985? It starred Tom Hanks as Richard Drew, a concert violinist who is picked out at random from a crowd to become the target of CIA surveillance. It also features one of my all-time favorite film scores by Thomas Newman, a composer who has given us many unforgettable scores like “Scent of a Woman,” “The Shawshank Redemption” and “Skyfall.” But like many film scores I loved from the 1980’s, this one never got a commercial release, and I was relegated to recording sections of the music from a VHS tape onto an audio cassette. While the dialogue threatened to get in the way, I was determined to enjoy this music any way I could get a hold of it.

But now, 33 years later, La La Land Records has now made Newman’s score to “The Man with One Red Shoe” available as a limited-edition CD. I have been waiting for this soundtrack with extreme patience, and it proved to be well worth the wait as this classic 1980’s score has never sounded better. Seeing the iconic image of the red shoe with a lit fuse on the cover made me want to buy this soundtrack yesterday. The back-cover features Hanks being hugged by the gorgeous Lori Singer while on a bicycle, and it makes me just as envious of him as when this movie first came out. And when you take the disc out, you will see a picture of the late Carrie Fisher who co-starred as Paula. Carrie, you are still missed.

Ever since I first watched the trailer for “The Man with One Red Shoe” on television, I quickly fell in love with its main title. It’s a classic 1980’s theme, and it sounded ever so cool. Listening to this theme, it made me want to walk around town like I was a spy. Granted, I was ten years old when this movie was released, so my imagination was unfettered by the harsh reality of the real world.

While I have long been led to believe Newman’s score was completely electronic, there’s actually a good deal of instrumentation involved in it as well. You can hear this in a number of the tracks throughout. Listening to this soundtrack reminded me of just how much I dug what Newman came up with, and in retrospect it proved to the world what a unique film composer he could be.

La La Land Records has included liner notes written by Jeff Bond entitled “How Thomas Newman Got His Groove On.” A portion of the notes deal with this movie’s making and of how it was released in a time when Hanks was best known as the star of the sitcom “Bosom Buddies,” long before he became the prestigious Oscar winning actor we all know him to be these days. In regards to Newman’s score, Bond described it best in this paragraph:

“Sonically, ‘The Man with One Red Shoe’ not only evokes the jazz fusion/pop electronica vibe of 1980’s popular music, but also presents the distinctive musical voice of composer Thomas Newman at a pivotal point in his development as an up-and-coming talent.”

The liner notes do not go into how the movie was ill-received upon its release with both critics and audiences, or that Hanks himself admitted this is not one of his films he would be quick to put into a time capsule. Nevertheless, I cannot recommend this limited-edition release of “The Man with One Red Shoe” soundtrack highly enough. As far as I am concerned, it was well worth the wait, and having it in my soundtrack collection makes it feel more complete than it already is.

Now, if someone could put out limited edition of Newman’s “Gung Ho” score, all will be right in the world.

Click here to find out how you can order a copy of “The Man with One Red Shoe Soundtrack.”