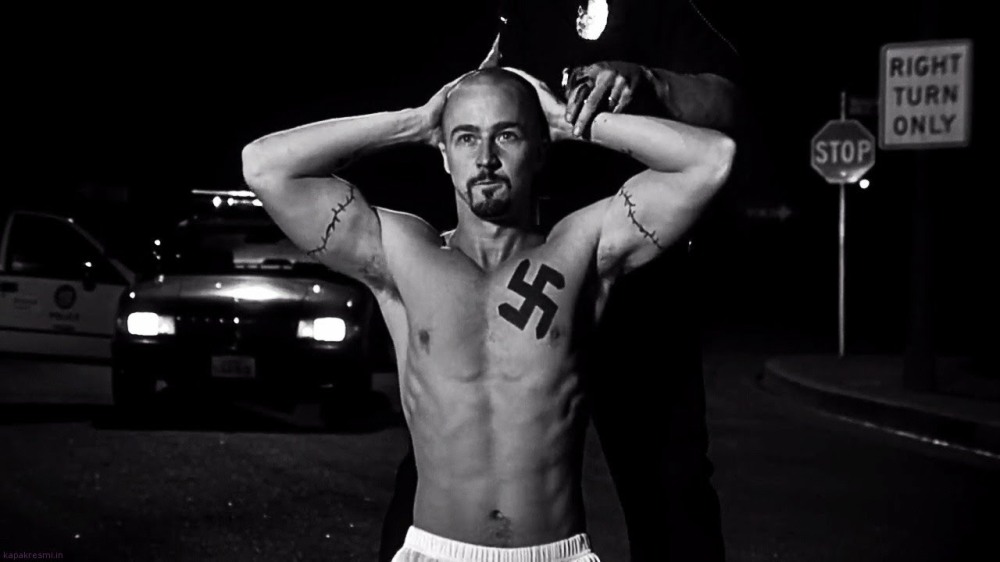 The tragic and horrific events which came about during a white supremacy rally held in Charlottesville, Virginia were a sad reminder of how hate can ever so easily take over the weak-minded. But moreover, it has shown how the power of white supremacists has grown over the years. While the current Presidential administration has allowed this movement, whether they admit or not, to gain strength, this network of racism has been growing for far longer than most people realize. While politicians continue to exploit our fears of international terrorists, it should be clear by now that domestic terrorism is an even bigger threat than what we are dealing with overseas. The question is, can we get more Americans to realize this sooner rather than later?

For years, we believed the white supremacy movement was one which was dying a much-needed death, but this is not the case. It got me to thinking of movies released over the years which dealt with this particular form of racism head on. While many saw Neo-Nazis and Anti-Semites as mere fringe groups on their way out, the filmmakers here saw them as still powerful as their leaders were skillful in gaining new recruits and keeping them on board even if they wanted out.

This was John Singleton’s third film following his Oscar-nominated “Boyz n the Hood” and “Poetic Justice,” and it takes place at the fictional college of Columbus University where people from different walks of life and races are forced to deal with one another in different ways. One particular subplot has a freshman named Remy (played by Michael Rappaport) having trouble fitting into his new environment. One night, while sitting alone on campus, he is approached by Scott Moss (Cole Hauser), a white supremacist who invites him to hang out with his friends for a drink. From there, Remy finds a sense of belonging he initially had trouble finding, but the other skinheads begin to wonder if he is all talk and no action, and this leads to a devastating climax which has him committing an act of violence he will never be able to take back.

When “Higher Learning” was released back in 1995, many critics did not take the white supremacy storyline all that seriously, thinking it was dated or dealing with something which no longer seemed like much of a threat. But watching this movie now in 2017, the actions of Scott Moss and Remy feel more real and scarier than ever before. Scott senses Remy is capable of violence from their first meeting, and he exploits this knowledge at every given opportunity. The last time we see Scott in the movie, right after Remy has shot at people with a high-powered rifle, he stares at the camera and smiles in a way which is truly chilling. Looking back, I think Scott saw this as the start of a new wave of white supremacy power, and the realization unnerves me to where I can’t get this movie out of my head.

Tony Kaye’s powerful 1998 film is impossible to forget about once you have seen it. Edward Norton stars as Derek Vinyard, a young man who becomes a member of the white supremacist gang called the Disciples of Christ following the murder of his firefighter father who was killed by black drug dealers. “American History X” follows Derek as he grows in power as a Neo-Nazi, goes to prison after he kills thieves trying to steal his truck, the abuses he suffers while in prison which make him rethink his racist philosophies, and his efforts to keep his brother, Danny (Edward Furlong), from following this same misguided path.

“American History X” is a fascinating study in how someone becomes enamored with a racist movement which he later seeks to abandon upon realizing the cost is greater than his soul can bear. Norton has given many great performances, but this is one of his best as he convincingly takes Derek from being a hateful individual to one who is compassionate and eager to escape the racist realm he has ensnared himself and his brother in. Furlong is equally effective as Danny, a young boy eager to follow in his brother’s footsteps, but who is dissuaded by him to follow such a path. Danny’s last lines in the movie, as he recites the final part of a paper he has written for school, ring true: “Hate is baggage. Life’s too short to be pissed off all the time. It’s just not worth it.”

This 2001 film was written and directed by Henry Bean, a Conservative Jew from Philadelphia who was the screenwriter behind “Internal Fears,” “Deep Cover,” and, yes, “Basic Instinct 2.” It stars Ryan Gosling, in what proved to be his breakout performance, as Daniel Balint, a brilliant but troubled Jewish yeshiva student who becomes a fanatically violent Neo-Nazi in New York. The story is based on the true-life story of Dan Burros, a member of the American Nazi Party and the New York branch of the United Klans of America who committed suicide after a New York Times reporter revealed he was Jewish.

What’s particularly fascinating about “The Believer” is how its main character of Daniel is so deeply conflicted over his own identity. He presents himself as a Neo-Nazi skinhead capable of vicious violence, but he cannot escape the fact he is Jewish and is still respectful of this religion’s history. When Daniel and a group of skinheads vandalize a synagogue, they trample on a copy of the Torah which he later takes home and carefully repairs. Like “American History X,” “The Believer” shows how someone can be easily swept up into a realm of hate, but we also come to see how Daniel believes hate is the Jews chief defense against utter annihilation. 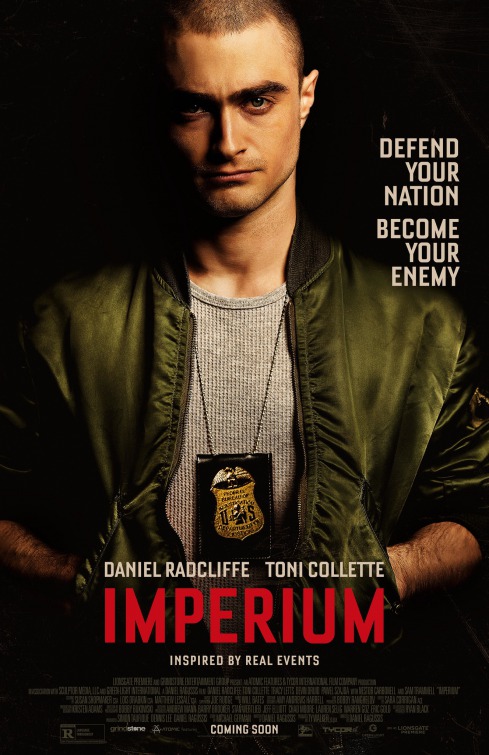 One of the more recent movies on this list, it stars Daniel Radcliffe as Nate Foster, an FBI agent who is recruited by Angela Zamparo (the infinitely cool Toni Collette) to infiltrate a white supremacist group. Nate is eager to prove to himself and others he can be an excellent undercover agent, but as he gets deeper into his role as a Neo-Nazi, he becomes unsure if he can escape it in one piece.

In some ways, “Imperium” is a routine undercover cop movie as the protagonist goes through the conflicts of becoming someone he is not outside of work, but it also shows how much of a threat white supremacy has become in America. There’s a montage near the beginning which shows images of racial hatred in America and of Neo-Nazi groups coming together, and it gets to where you cannot dismiss white supremacists as being a part of a mere fringe group. Seeing those images makes this movie worth the price of admission as they show much of a threat they are against the values this country was founded upon.

Of all the movies on this list, it is the only one which doesn’t take place in America. “This is England” was written and directed by Shane Meadows who himself was involved in white supremacy groups as a kid. The movie takes place in 1983 and follows 12-year-old Shaun Fields (Thomas Turgoose) as he gets picked on by bullies at school, and we learn his father was killed in the Falklands War. One day, he comes across a gang of skinheads led by Woody (Joseph Gilgun) who sympathize with his struggles and invite him to join their group. From there, Shaun finds himself a part of a family which gives him a sense of belonging and a rise in his own self-esteem. But then Andrew “Combo” Gascoigne (Stephen Graham) returns to this group after serving a prison sentence, and he proves to be a charismatic personality as well as a sociopath. Andrew’s eagerness to take leadership over the group causes many of its members to jump ship, but Shane stays on as he is too much a part of this family to simply abandon it.

“This is England” takes an incisive look at how this skinhead subculture had its roots in the 1960’s West Indies culture and later became adopted by white supremacists. This movie shows this leading to a division amongst skinheads, and of the ways they could attract new members to their movement. It received tremendous critical praise upon its release in 2006, and it inspired a spin-off television series which took place three years later.

Seeing the disgusting rally in Charlottesville, Virginia and its aftermath reminded me of an episode of “Law & Order” entitled “Charm City” in which Detectives Lenny Briscoe (Jerry Orbach) and Rey Curtis (Benjamin Bratt) investigate the murders of several subway riders who were killed by a poisonous gas bomb set off on a train. Eventually, they find and arrest Brian Egan (Kevin Greer), a white supremacist who is later convicted for the crime. Attorney Jack McCoy (Sam Waterston) informs Brian, “You’re a racist and a murderer, and you just found out your country won’t tolerate it.” To this, Brian says the following:

“You mean your country won’t. Mine is growing. You think you can stop it? You can’t stop anything.”

This “Law & Order” episode aired back in 1996, but these lines of dialogue now seem more chilling than ever before.