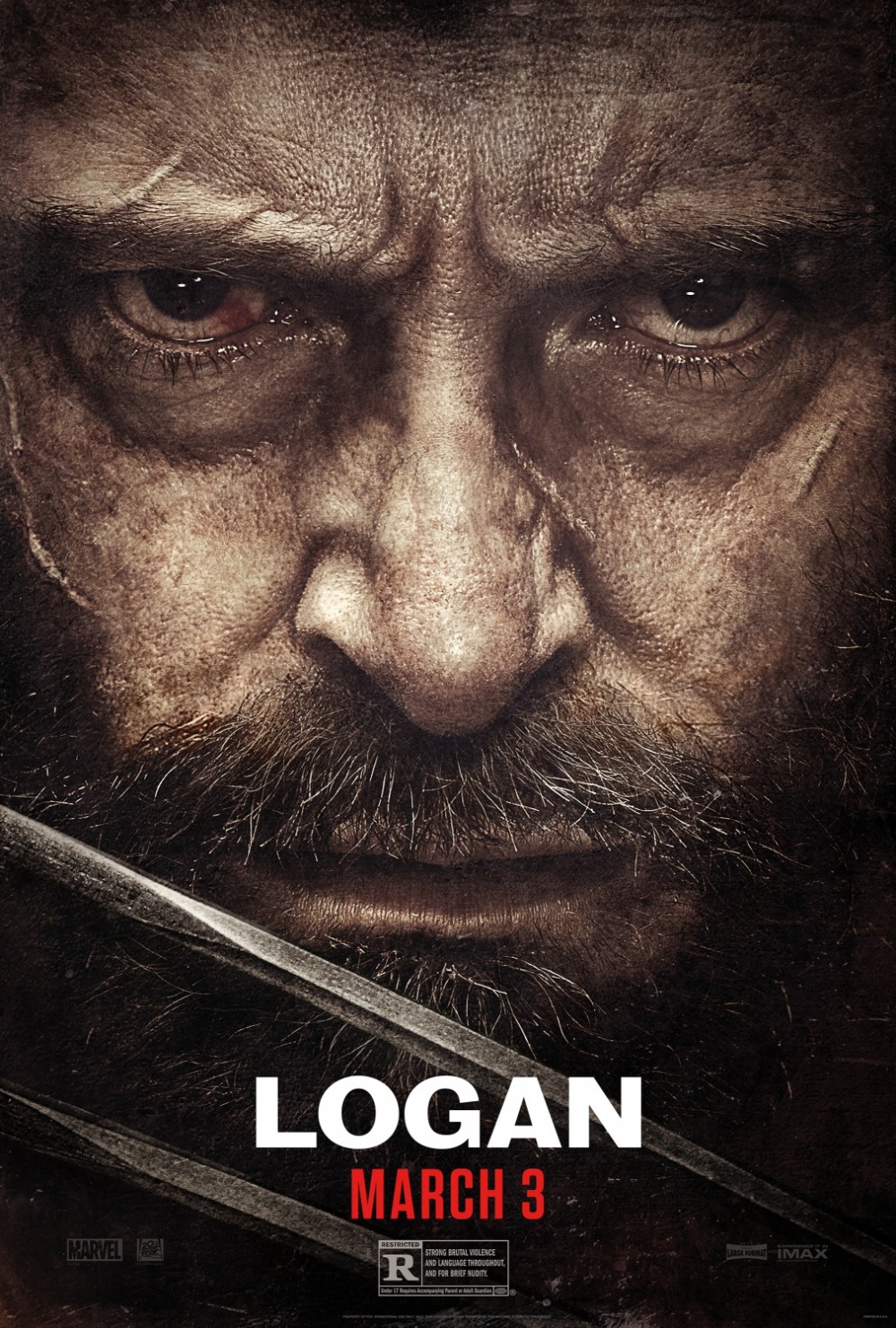 Watching “Logan” is especially thrilling if you have been keeping up with the “X-Men” movies since the first one came out in the year 2000. While the previous installments played by a certain set of rules, this one smashes through them to create something unique in the long-running franchise. No longer shackled by the PG-13 rating, Hugh Jackman is given free rein to show just how bloody Wolverine can get when you piss him off, and he gives this character, which made him into a movie star, the swan song he deserves.

While the “X-Men” movies were largely science-fiction, “Logan” plays more like a western, and this will become abundantly clear even before characters sit down in a hotel room to watch “Shane.” We catch up with Wolverine, a.k.a. James “Logan” Howlett, in a future not too distant from our own where mutants have long since become an endangered species. Wolverine is now past his prime and works as a limo driver in an effort to save money to buy a boat which he and the ailing Professor Charles Xavier (Patrick Stewart) can sail away in from all of humanity. While he can still kick ass, he is now hobbled by a bad leg and a dependency on alcohol which eases the pain of surviving in this world for far too long.

The same goes with Xavier who now suffers from a neurodegenerative disease which has turned his telepathic abilities from a blessing into an unstable force people would be best not to be in the vicinity of. When he has an episode, the world around him is threatened in a highly unsettling way, and only Wolverine can give him the medication he needs to stop him from becoming a true weapon of mass destruction.

Then into the picture comes Laura (Dafne Keen), a young mutant who has more in common with Wolverine than he would care to admit or realize. Like the miraculously pregnant woman in “Children of Men,” Laura represents the next step in human evolution, and she needs to be taken to a safe haven for mutants which may or may not exist. On her trail are Reavers, a team of criminal cyborgs hell-bent on wiping mutants off the face of the earth, led by the gleefully sadistic Donald Pierce (Boyd Holbrook) who is not about to let his fandom of Wolverine get in the way of his mission.

What I especially admired about “Logan” is how it dealt with the effects of aging and of people now past their prime. This is s0mething superhero or comic book movies, let alone most Hollywood movies, usually avoid dealing with as the powers that be wish to keep everything looking and feeling youthful. But we are forced to look at Wolverine and Xavier at a point in their lives where they are more vulnerable than ever to their enemies and especially their own mortality. Once they were powerful, but now they are pretty much off-warranty. How does one deal with arriving at a point in life where their bodies start working against them? “Logan” dares to deal with this question, and it does so in a way which is more character driven than ever before but still action packed as ever.

Jackman intends “Logan” to be his last “X-Men” as he has played Wolverine now for over a decade, and he has certainly given the character quite the exit. He even took a pay cut in order to ensure this film would get an R-rating, and it was certainly worth it as it gives him the freedom to make this iconic comic book character a far more blunt and brutal instrument than ever before.

Life is suffering, and no one knows this more than Wolverine who has lived more lifetimes than anyone else around him. Jackman has been brilliant at letting us see the inescapable vulnerabilities which are just beneath the surface of his tough and rugged exterior. Seeing him portray Wolverine at his most wounded is brave as he shows how even the most powerful of superheroes can reach their limit and yet still fight the good fight.

The movie also proves to be a perfect swansong for Patrick Stewart’s interpretation of Charles Xavier as he too portrays this character in a way we never expected. The professor was once a man of significant intelligence and insight, and now he has become a victim of the cruelties of aging none of us are eager to experience. Stewart shows no fear at portraying Xavier in his most disabled state, and while it is painful to see this once great character reduced to a mere shell of who he once was, the great actor is priceless in giving us a man who clings on to the mere gifts afforded to him in a way we all take for granted. It’s a heartbreaking performance, and Stewart plays it without a single faked emotion.

There are also a number of terrific supporting performances here, and the most impressive of the bunch comes from Dafne Keen as the young and deadly mutant, Laura, who befriends Wolverine and Professor X. At the tender age of 11 or 12 years old, Keen is forced to play most of her scenes with no dialogue whatsoever, but she still speaks so many words with even the smallest of facial expressions. It’s a lot to ask of an actor of any age to accept such an acting challenge, but she is more than up to it and gives us a riveting portrayal of a child who has been made to become something no child should ever be made into.

I also admired Stephen Merchant’s performance as Caliban, an albino mutant who can sense and track other mutants. This could have easily been the kind of wimpy character who goes through the usual scenarios of betraying others for his own selfish purposes, but Merchant makes him into much more than that as we see how heavy the consequences of his actions weigh on his conscience. In the hands of another actor, this could have been a throwaway role, but Merchant is too good to let something like that happen.

Boyd Holbrook makes a perfectly hateful yet charismatic villain out of Donald Pierce, Eriq La Salle has some strong moments as a family man who helps out Wolverine and his friends, and Frank Gallegos figures prominently in a small role as a Federale Lieutenant who ends up in the wrong place at the wrong time. Please believe me when I say Gallegos is concrete proof of how actors in the smallest of roles can make quite the impression, and he more than does that here.

Directing “Logan” is James Mangold who directed the previous “X-Men” spinoff “The Wolverine” which was easily better than its predecessor, “X-Men Origins: Wolverine.” Mangold’s films have mostly been studies in empathy about people who have been severely damaged by life, but who still have yet to meet their greatest challenge. Whether it’s Sylvester Stallone’s disabled police officer in “Copland,” the emotionally unstable women portrayed by Winona Ryder and Angelina Jolie in “Girl, Interrupted,” singers Johnny Cash and June Carter in “Walk the Line,” or even Tom Cruise’s eccentric spy in “Knight and Day,” the characters who occupy his films have suffered deep emotional wounds which they will be eventually forced to confront and make peace with whether they want to or not. “Logan” definitely fits in with the themes Mangold has explored throughout his films, and he makes this comic book/superhero an especially enthralling one as we are thrilled as much as we are moved emotionally.

Mangold also breaks free of the rules and conventions the “X-Men” movie franchise has laid out for its various filmmakers, and as a result, it really does feel like a true spin-off compared to the others before it. He gives “Logan” a very gritty feel, but as brutal and bleak as this movie is, it is also filled with hope. While history does repeat itself more often than we would like to admit, we are left with the strong possibility that the next generation of mutants will find a better way to exist in a world with those who have yet to fully trust them.

Seriously, I found “Logan” to be a thing of beauty as it dares to take characters we have grown up watching and put them in situations no filmmaker would have dared to put them in 10 years ago. I came into it thinking it would be the “Alien 3” of the “X-Men” movies as the use of Johnny Cash’s cover of Nine Inch Nails’ “Hurt” in the teaser trailer implied this would show Wolverine and Xavier at the darkest points in their lives. It certainly does, but it doesn’t leave us in a state of utter depression at its climax. We have come too far to give up on these mutants, and there’s no giving up on them now.

“Logan” proves to be one of the best “X-Men” movies as well as one of the best comic book movies ever made. With this gripping installment, this franchise has found its own version of “The Dark Knight,” and 2017 has already found one of its best motion pictures in only its third month.