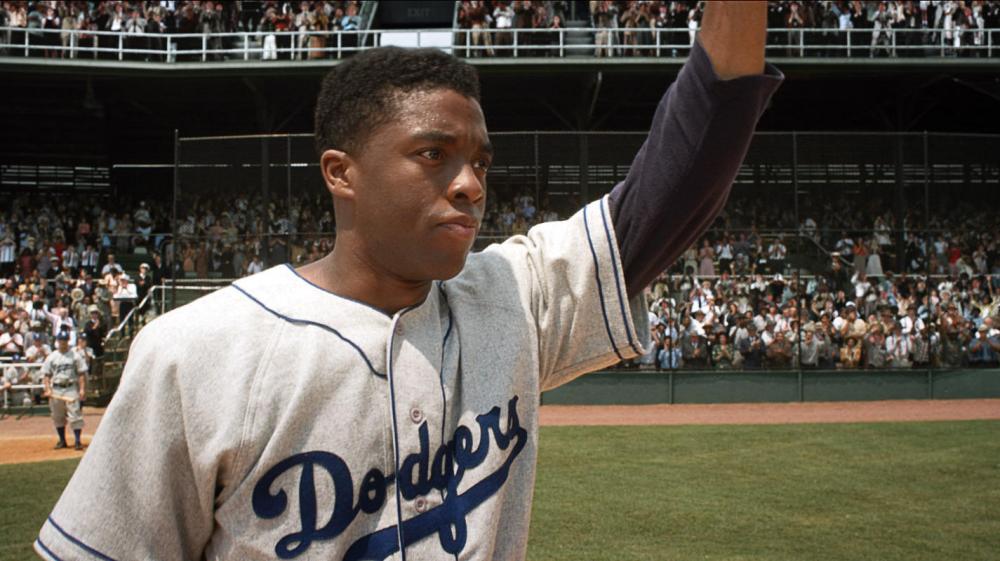 Before he took on the title role in “Black Panther,” Chadwick Boseman had the honor of portraying baseball great Jackie Robinson in “42.” With Hollywood being the way it is, you would expect to see studio executives insisting on a getting a big time movie star to portray the famous baseball legend, but writer/director Brian Helgeland got away with casting Boseman back when he was relatively unknown to audiences at large. An actor and playwright by training, Boseman started to burn into our collective consciousness with this performance.

Filmmakers and actors over the years like Spike Lee and Denzel Washington have tried and tried to bring the story of Robinson to the big screen but with no success. It took Helgeland, who won an Oscar for co-writing the screenplay to “L.A. Confidential,” to finally succeed in making such a film a reality. The burning question is how did Boseman get the role of Robinson over so many others? There must have been thousands upon thousands of actors desperate to play the legendary ballplayer, and there is something very inspiring about a lesser known actor beating out a bunch of big-name stars for this opportunity. Boseman, during an interview with Julie Miller of Vanity Fair, explained how he got cast.

“I had left L.A. for a few months, and I was directing a play Off Broadway in the East Village,” Boseman told Miller. “I came back to Los Angeles for a visit and was supposed to go back to New York on a Friday, and my agent said, ‘No, they want to see you for 42. For the Jackie Robinson film.’ I met with 42 director Brian Helgeland, and I knew that I would love to work with him. He’s an Oscar winner and a great writer but also, the way that he works, you know sometimes that you can vibe with a person and that you will work well together.”

“The additional meeting was great. A lot of it was just talking about the role and project and why he wanted to do it,” Boseman continued. “I left thinking that it was a great audition but didn’t necessarily know if I would get it. The next week, they called me back in again, and I could tell that he was trying to show me to somebody else. They were taping it and saying stuff like ‘What else might they want to see?’ I realized at that point that I was Brian’s choice, so I was just trying to prove it.”

Before “42” came along, Boseman had been working a lot in television and appeared on shows like “ER,” “Law & Order” and “CSI: NY.” Eventually, he started starring in movies such as “The Express” among others. Surprisingly though, Boseman did not originally set out to be an actor. A graduate of Howard University and the British American Dramatic Academy at Oxford, he saw his career heading in a different direction.

“When I started in theater and film, I thought I would be a director,” Boseman said. “The only reason that I started acting was because I felt like I needed to understand what the actors were doing and their process so that I could better guide them. During the course of that, I caught the acting bug. But once I finished my acting training, I still was thinking I would be a writer/director. I don’t really think I focused on acting until I came to L.A. in 2008. That’s when it got serious for me.”

As a kid, Boseman played Little League baseball for a time, but he was more serious about playing basketball after a while. When it comes to sports movies, most directors prefer actors to have some sort of experience in baseball or whatever sport their film is about. It looks like Boseman had just about enough experience to show he could play Robinson, but he still had to go through a lot of baseball training in order to prepare for the role before the cameras started rolling. He related his training regimen to Eric Alt of Athlon Sports as well as the challenges he faced during pre-production.

“All the coaches I worked with concentrated on the way he did things,” Boseman told Alt. “They studied his swing, and I studied his swing on my own. We would tape batting practice and they would film me base running, and then every two or three weeks they would take his footage and split-screen it with mine and give it to me and let me compare. We did that for almost five months.”

“The fielding was much more difficult than the batting,” Boseman continued. “I’m a natural athlete, so I have the hand-eye coordination to hit the ball. But the fielding? The footwork? Understanding where to throw the ball from, depending on where you receive it? I just wish there was more of it in the movie because I worked so hard on it! (laughs) When I saw the movie I was like, ‘Man, that’s all? That’s it?'”

The cast and crew of “42” also had a great asset in having the participation of Jackie’s widow, Rachel Robinson. It turns out Rachel was very much involved in looking over different drafts of the screenplay, and it gave the film a genuine legitimacy it might otherwise not have had. Boseman told Miller he began his preparation for the role by talking to Rachel.

“When you’re trying to tackle a hurricane, or something larger than life, I knew that the first thing I had to do was talk to her,” Boseman said. “She gave me some books. She sat me down on the couch and told me about their relationship and the rules that they set for themselves to get through the experience. That was a great start, because you are meeting someone who is still connected to him and you get a sense of him when you meet her. You see what kind of a man could actually stand by her. Who is this guy that she would fall for?”

“In some sense, you got the sense of the edges of him, like the two of them were a puzzle. She is one piece and his piece is not here, but I can feel the edges from her,” Boseman continued. “She started the journey, definitely. She showed up on set. And she challenged me by asking me why I should play him. That’s a good place to start because you have to start with yourself.”

While Chadwick Boseman must have felt a great deal of pressure in bringing the legendary Jackie Robinson to life in “42,” he did deliver a terrific performance which had audiences applauding loudly when the credits come up. Acting may not have been Boseman’s first choice as a profession, but it is certainly working out for him in a great way.

Julie Miller, “42 Star Chadwick Boseman on Playing Jackie Robinson, Copying His Baseball Moves, and Being Stood Up by the President,” Vanity Fair, April 12, 2013.