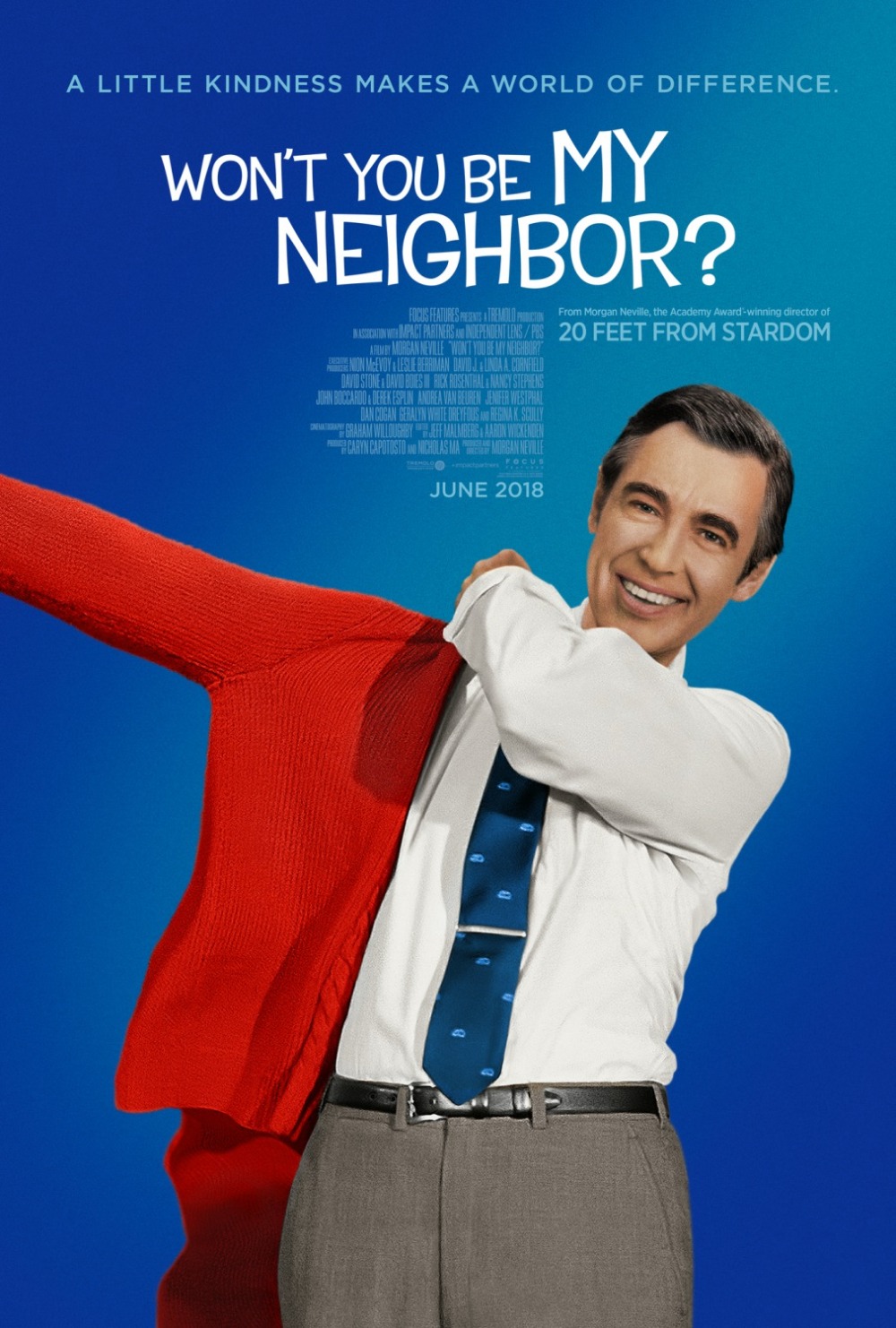 I was one of the many who got exposed to “Mister Rogers’ Neighborhood” at a very young age, and I still vividly remember watching its host greeting us with the same song while taking off his coat and changing his shoes. Since then, I have become far more familiar with the show’s parodies, especially the brilliant ones by Eddie Murphy and Robin Williams, to where it seems much easier to ridicule someone who encourages us to see the best in humanity instead indulging in its worst qualities. If Fred Rogers were to start his show today, I’m not sure if he would have had the same impact and instead be a subject of endless ridicule and innuendos.

Well, the road to hell may be paved with good intentions, but Morgan Neville’s documentary “Won’t You Be My Neighbor?” shows how Fred Rogers’ good intentions never led him in that direction. The doc shows how he came to inspire generations of children to love one another and to see the good in life even when things seem so bleak and scary. While many have since tried to tarnish his legacy and make him look like a wolf in sheep’s clothing, Neville reminds us of what a good man he was and of how he never lost sight of the strong values he instilled in others.

We learn Rogers was an ordained minister and about to enter the seminary when he discovered the existence of television. Although he initially hated this invention and described it as being “awful,” he quickly came to see it as something he could use to his advantage. With “Mr. Rogers’ Neighborhood,” he used television as a way of helping children through what he called “the modulations of life,” and the lessons he imparted were profound as he dealt with topics other children’s programming would never dare touch.

It’s fascinating to watch the beginning of “Mister Rogers’ Neighborhood” as it debuted back when everything on TV was in black and white. The production values proved to be very low and, unlike Jim Henson, he was not out to break the bounds of puppetry or technology. Instead, this show was an exercise in simplicity as the use of a simple ordinary neighborhood and a land of make believe was more than enough to draw in a large audience as the show proved to be imaginative enough as he probed the more unsettling issues life has to offer.

Rogers didn’t hesitate to deal with the assassination of Bobby Kennedy, nor did he try to ignore the tragedy of the Challenger space shuttle when it exploded. The way he approached these events and issues was almost subversive as he dealt with them in a way which wasn’t necessarily direct, but which acknowledged the trauma many around the world felt. As always, he encouraged us to find ways to channel our anger, despair and sadness into something positive, and his words always rang true.

With people like Fred Rogers, I keep waiting for the seams to show in this documentary as no human being can ever be this perfect. We are all flawed in one way or another, and he certainly is no exception. In an interview with Francois Clemmons, the African-American actor and singer who played Officer Clemmons on “Mister Rogers’ Neighborhood,” Clemmons talks about when Rogers confronted him over his visiting a gay bar and asked him never to go there again. Rogers’ fear was one of the program’s sponsors, Johnson & Johnson, would pull their advertising away if they realized one of the stars was a gay man. I figured this would lead to the exposure of Rogers’ bigotry, but Clemmons says while Rogers advised him to keep his sexuality in the closet, Rogers never judged him over it even if his religion may have, and that he showed his love to him in such a way no one had before.

Looking at the scenes shown here from “Mister Rogers’ Neighborhood” reminded me of how the lessons Rogers gave us proved to be as profound as they were subversive. To protest the treatment of African-Americans being thrown out of “white-only” swimming pools, he is shown in one episode with his feet in a tub of water, and he invites Officer Clemmons to put his feet in as well when he drops by. When the show aired in 1968, the Vietnam War was being fought overseas and he dealt with it in his land of make believe where King Friday XIII kept fighting against change and peace. In fact, Neville reminds us how this show dealt with topics like war, divorce and even the assassination of Bobby Kennedy. Does any of today’s children’s programming do this? If so, please tell me because I can’t think of any single show which does.

Neville touches on Rogers’ own childhood very lightly to where only so much is said about it. We learn how he grew up in a household where he was never allowed to be angry as a kid, and of how he spent a good portion of his life feeling like he didn’t fit in anywhere. Indeed, these struggles made for intelligent fodder on his show as he talked about different ways to deal with anger, and one of the most heart-rending moments in this documentary comes when Henrietta Pussycat asks if she was a mistake. “Mister Rogers’ Neighborhood” didn’t just deal with world and personal issues in an intelligent way, but in a brave one as well.

Few, if any, people can ever lay claim to being too good to be true, and Fred Rogers is shown without a doubt to be good and very true. So, it is painful to see others attempt to rewrite his legacy in an effort to change the narrative of history, and we see this in a FOX News segment in which commentators accuse Rogers of destroying the childhood of many by telling kids they were all special as if it were the equivalent of child abuse. These days, most people will not allow themselves to believe any person could be so well-meaning and thoughtful as they always suspect a do-gooder of being up to something devious.

There is a scene where we see Rogers in a solitary state as if the cruelty of the world threatens to overwhelm him. Were he alive today, I wonder how he would feel about the current political havoc we are suffering under as many of the things he fought against like racism and bigotry have made an unwelcome comeback as they serve as a cruel reminder of how history repeats itself. I would like to think Rogers would have given us ways to overcome this endless stream of negativity, but we see his faith being tested constantly to where he must have been constantly exhausted by all the terrible things he was forced to endure.

While watching “Won’t You Be My Neighbor?”, I was reminded of what an English teacher in my freshman year of college once said:

“This is a generation which has been robbed of its innocence. We have all been mediatized.”

Keep in mind, she said this back in the mid-1990’s before the internet and cell phones became the things they are today, so the damage was already being done. These days we are led to believe more in the worst of people instead of the best, and we are more fascinated with the skeletons in a closet than in good deeds. One of my childhood heroes, Bill Cosby, a man who made us laugh endlessly and gave us life lessons we never forgot, has since been revealed to be a misogynist, a sociopath and a sexual predator who will soon be sent to prison for his crimes. His legacy is now forever tarnished to where much of what he taught us will be permanently lost to future generations.

This all makes “Won’t You Be My Neighbor?” an especially important document of a man who left an indelible mark on our lives. While many of our heroes let us down in thoughtless and horrible ways, Fred Rogers never did. He stayed true to himself, and he never lost sight of how children have very deep feelings and needed guidance in a world which can be very complicated to say the least. This is a life worth celebrating, and Neville gives us many reasons to celebrate Rogers’ life as the lessons he taught us, however dated they may seem today, are ones we need to pass on to others.

Another thing I was reminded of was the “Hate Crimes” episode of “Homicide: Life on the Street” in which Detectives Pembleton and Bayliss investigate the murder of a man they are led to believe was homosexual. By the end of the episode, it is revealed the man was not gay, and they both discuss the effect this case has had on them:

Pembleton: “I broke the first rule of being a detective. I assumed that Zeke Lafeld was homosexual.”

Pembleton: “Yes, it is human nature to kill someone simply because their sexual orientation is different.”

Pembleton: “People? That’s you and me, Tim. Grown-ups. Why is it that children don’t care about such things?”

Bayliss: “As adults we get socialized. We learn to behave.”

Indeed, Pembleton’s last line above speaks to an inescapable truth. However, looking at Rogers’ life through this amazing documentary and of the infinitely positive effect he had on so many makes me believe he never learned to hate, ever. If he did have any negative emotions inside of him, he certainly found creative ways to rid himself of them, and he shared them with his audience in the hopes they would focus more on the positive instead of the negative. Maybe he was different than most people but thank goodness for that. Thank goodness we got to meet Fred Rogers and be his neighbor, and thank goodness we have this documentary which pays loving tribute to his memory.

I think it’s only fair to end this review with one of Rogers’ most famous quotes as it still resonates deeply today:

“From the time you were very little, you’ve had people who have smiled you into smiling, people who have talked you into talking, sung you into singing, loved you into loving. So, on this extra special day, let’s take some time to think of those extra special people. Some of them may be right here, some may be far away. Some may even be in heaven. No matter where they are, deep down you know they’ve always wanted what was best for you. They’ve always cared about you beyond measure and have encouraged you to be true to the best within you. Let’s just take a minute of silence to think about those people now…”