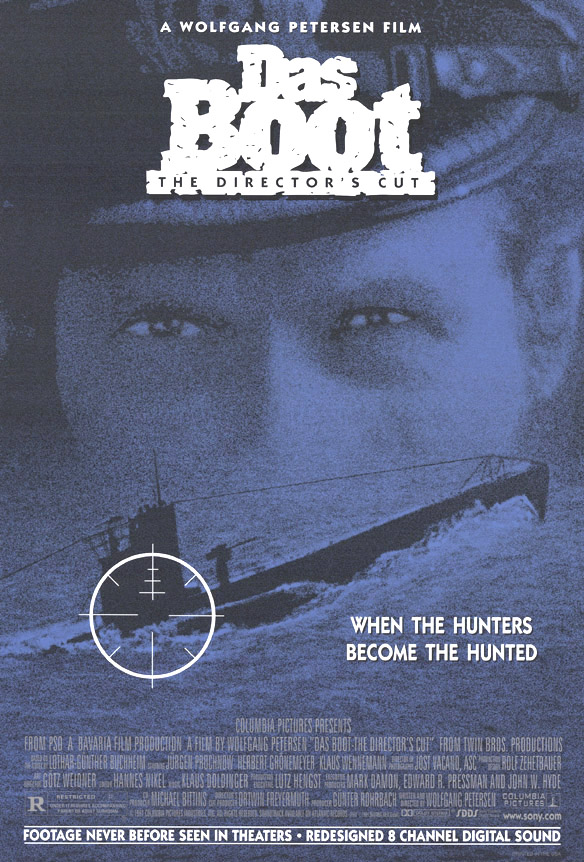 With it out on Blu-ray, viewers can once again see that “Das Boot” is still the greatest submarine movie ever made. Other underwater sea adventures like “Run Silent, Run Deep,” “Crimson Tide,” and “The Hunt for Red October” may come close, but none of them can capture or match its power in unbearable claustrophobic tension. It remains Wolfgang Petersen’s crowning achievement as a director, and it has lost none of its power in sucking us into the inescapable terror people face in the deep dark sea.

“Das Boot” takes place in World War II as Commander Willenbrock leads a group of boys to sea on a U-Boat, the German version of a submarine, and covers the tedium of life at sea when no battles are fought. You feel the sweat and body odor of the crew quite vividly to where you will want to take a cold shower afterward. But it’s when they face off against destroyer ships when the intensity really goes into serious high gear.

Petersen does a brilliant job of conveying the terror and claustrophobic nature everyone on the U-Boat is forced to endure. You are right there with the crew and experiencing their frenzied emotions as the destroyers sail over them dropping depth charges which threaten to sink their boat in a heartbeat. The “ping” noises make the suspenseful tension even worse as the position of the submarine becomes easier to determine, and this becomes a film you experience far more than watch.

The director also does a really good job of getting viewers to know various crew members and the important roles they have on the ship. There is Chief Engineer Fritz Grade (the wonderful Klaus Wennemann) who finds looking at pictures of his wife too painful. Then there’s Chief Mechanic Johann (Erwin Leder) who is in love with his engines the same way Scotty loved the Enterprise in “Star Trek.” And there is also Senior Cadet Ullmann (Martin May) who is constantly worried about his fiancée who is French and pregnant. The more viewers know about the crew, the more emotionally drawn they are to their predicament.

There may some people who object to seeing “Das Boot” on the grounds the crew members were Nazis. Truth be told, not all of them are big fans of Adolf Hitler, and they are never seen wearing a Nazi insignia on their uniforms while at sea. But regardless of this, take away the politics of what’s going on and you will realize just how universal this movie is in what it portrays. Had it been the “good guys” instead, they would have endured the same crippling terror and fatigue so this crew could have been of any nationality.

It is also a powerful anti-war movie as well in showing not just the horrors and destruction of war, but also of the victories which become empty ones when soldiers see what is left behind. This is especially the case in one scene when the crew members are on the surface and surveying a freighter they successfully destroyed. They revel in their victory, but then they see survivors jumping off the ship into the ocean. They swim to the submarine pleading for help, but while the German crew members want to assist them, the Captain concedes there is no room for them onboard, and they are left to drown. It’s an emotionally devastating moment which captures the senselessness and the price of war.

“Das Boot” is based on the novel by Lothar-Günther Buchheim which was inspired by his own wartime experiences as a war correspondent onboard submarines. The character most resembling him here is Lieutenant Werner, and he is our guide through the chaos as his lack of experience aboard a submarine mirrors our own. What he discovers about life at sea, viewers discover along with him. Playing him is German singer Herbert Grönemeyer, and he does great work in conveying his naivety while covering the goings on of a German crew.

The best performance, however, comes from the great Jürgen Prochnow who plays Commander Willenbrock, the hardened sea veteran who looks like he’s seen everything war has to offer. The other officers freak out easily during an attack, but he keeps his cool because he needs everyone to do their jobs. It’s when he starts losing it, however, when things get really bad, and then the audience has a reason to freak out. Prochnow creates a multi-dimensional character which feels very much lived in, and he gives the Commander a subtle vulnerability which looks and feels effortless.

Petersen has been known best for making movies about people who are stuck in small places where there’s not much room to hide. He enthralled us when the American President’s plane was hijacked in “Air Force One,” he had Clint Eastwood chasing after John Malkovich during “In the Line of Fire,” and he has George Clooney and company trapped in the rocky sea in “The Perfect Storm.” “Das Boot” is where it all started for him, and it is a seriously intense and emotionally exhausting experience which thrills and terrifies you in equal measure. The accuracy to detail is never in doubt, and the audience will come up gasping for air once the credits roll.

There may be another submarine movie or two coming to movie theaters in the future, but after watching “Das Boot,” you can bet they won’t come close to topping it. Movies don’t get much more thrilling than this one, and it is a must see for those who are fans of Petersen’s work or war movies in general. It is also more preferable to some of the director’s more recent work like “Poseidon” and “Troy.”

Note: There are currently many different versions of “Das Boot” available. The original theatrical cut lasts about two and a half hours. The director’s cut of it added an hour of footage which gave more depth to each character. And before it made its way onto Blu-ray, there was the uncut miniseries version which runs for almost five hours. You may want to start off with the director’s cut and then move on to the miniseries which perfectly captures the infinite tedium of the crew that feels endless.