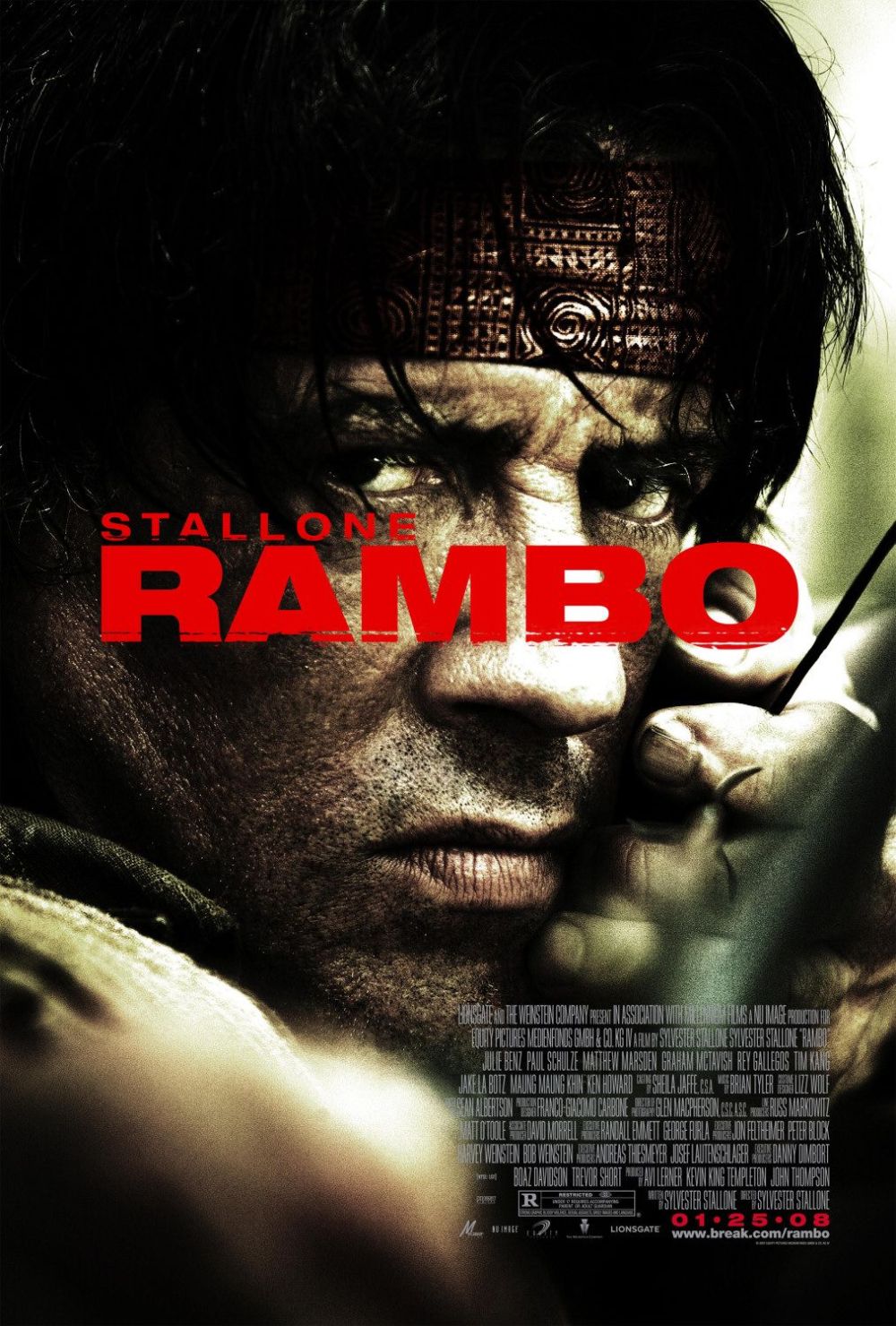 WRITER’S NOTE: This review was written in 2008 back when this film was released.

With Sylvester Stallone having revived one of his most iconic characters with “Rocky Balboa,” it was only a matter of time before he brought back John Rambo. From “First Blood” to “Rambo III,” the ex-Green Beret was forced to deal with hostile elements which kept him from putting his violent past behind him, and now he is back after a two decade hiatus during which I am guessing this character finally found a way to silence his demons for longer than a couple of years. But when he starts wielding his knife or bow and arrow, the blood starts to flow like a river, and it’s a fast-moving river to be sure!

We catch up with Rambo in “Rambo” as he is living a life of solitude in Thailand where he catches poisonous snakes and sells them, and also drives his boat up and down the river. He has completely divorced himself from the world and its major concerns and, no surprise, he would rather not go back into combat again. To so will have him be reminded of who he really is and of what he cannot escape from. Then along comes a group of missionaries who try to hire Rambo to take them upriver where they can help those who are living in terror of the Burmese army which has no remorse for their suffering. Before you know it, the army descends on the village they are working in, and they wipe out just everybody including babies. Those who survive the onslaught are taken hostage by the army which is led by a vicious general who seems to be devoid of just about every emotion other than hate.

After all these years in development hell, I kept wondering who John Rambo was going to fight this time around. There were rumors he would take on the Taliban or some cult in America. Stallone’s inclusion of the Burmese army is an interesting choice as I am not sure how aware people are of the atrocities they have inflicted. “Rambo” starts off with some documentary footage of the army and the decaying corpses they leave in their wake. While it may seem exploitive to some that Stallone would use this footage here, it effectively sets up how dangerous and cold-hearted these villains are and will be throughout. It succeeds also in anchoring these antagonists in a believable way, and it makes them all the more threatening. Stallone is smart not give us a bunch of cartoonish 1980’s villains here as it would simply take away from the story and turn it into the kind of action flick which has not aged well.

Stallone directs here again as he did with “Rocky Balboa,” and this is the first Rambo movie which has him in front of and behind. It is hard to think of another individual who could have directed it as he knows the character so damn well and so much more than just about anyone else. It is also important to note that, along with “Rocky Balboa,” this is the first time Stallone has directed any movie in about 20 years. Some get rusty when they are away from the director’s chair for too long (we are looking at you George Lucas), but Stallone looks to have stepped back into this position without having missed a beat.

And speaking of action, “Rambo” is overwhelmed with it If you thought the first 20 minutes of “Saving Private Ryan” was exceedingly violent, wait till you get a load of this film. Rambo does not just blow away his enemies, he eviscerates them in such gory detail to where Dario Argento would be in awe of what Stallone has pulled off here. The ex-Green Beret also slices and dices better than Jason Vorhees, Freddy Krueger, or even Michael Meyers ever could. He eviscerates, decapitates, disembowels, and hits his targets with absolute precision and without hesitation. Many have called this the most violent movie ever made, and this may very well be true.

My guess is since this is the first Rambo movie made in two decades, Rambo has been laying low and not causing any trouble. As a result, he has had all this tension building up inside of him for a long, long time. Now had this movie came out a few years after “Rambo III,” then maybe he would not have battled his enemies in such an immensely gory fashion. But since he has been out of action for so long, it somehow makes sense he is slightly angrier than usual when he gets stuck in situations like this. In other words, do not piss him off after a long stretch of time where he has not done any hunting.

Many of the characters we see here do come across as one-dimensional, and this quickly reminded of Stallone’s limitations as a writer. There is a group of mercenaries who are led by one loud mouth Australian who would happily be anywhere else had he not been paid so much for this one job. These characters, however, are redeemed by the end of the movie as they fight for something as opposed to just the dollar. Also, some of the dialogue is unintentionally laughable, but thank goodness there is not too much of it here.

Among the actors teamed up with Stallone is Julie Benz who plays Sarah, the woman who wins over Rambo by meeting him at his level of morality. There is no sex here as Rambo looks to have become too much of a monk to where one wonders if he will ever be sexually active again (“no time for love Dr. Jones!”). But in the end, romance really has no place in a movie like this.

“Rambo” is also helped by a stupendous music score by Brian Tyler who more than honors the themes the late Jerry Goldsmith first brought to this franchise during its humble beginnings. It more than matches the furious pace of the action unleashed on us here, and gets at the deeper feelings of all the characters, especially Rambo himself. Tyler’s score here adds tremendously to the experience of watching this movie.

“Rambo” is not as good as “Rocky Balboa,” but it does deliver as an action movie. In fact, it has set the action bar so high in terms of onscreen deaths to where it will be a complete surprise if any other film in 2008 comes even close to topping its carnage. Anything is possible, but still.