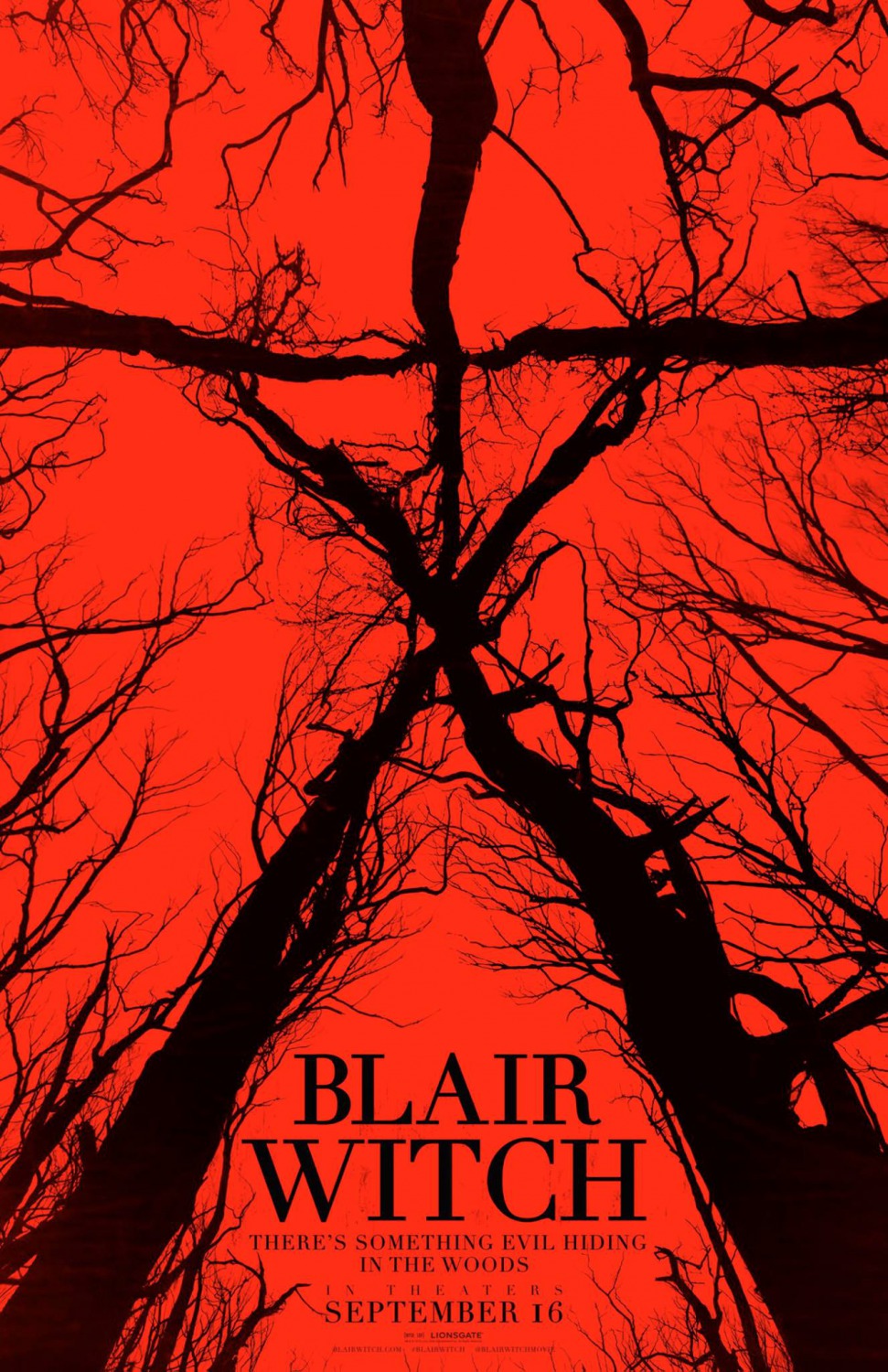 While watching “Blair Witch,” I kept hearing these lines of dialogue between Richard Attenborough and Jeff Goldblum from “The Lost World: Jurassic Park” in my head:

This particular “Blair Witch” movie came out of nowhere as it was filmed in secret under the title “The Woods,” but over this past summer it was revealed to actually be a direct sequel to “The Blair Witch Project.” With a couple of talented filmmakers at the helm and a cast of unknown actors in front of the camera(s), this third “Blair Witch” movie showed a lot of promise as the memories of watching the original all those years ago remain very vivid to me. But what we end up with here has me paraphrasing the lyrics of a song by The Who: Here comes the new Blair Witch, same as the old Blair Witch.

The movie opens up on James Donoghue (James Allen McCune), the brother of Heather Donoghue, viewing some grainy footage which leads him to believe his sister might still be alive. As a result, he forms an expedition to venture into the Black Hills woods in Burkittsville, Maryland to search for her, and he is joined by Lisa Arlington (Callie Hernandez), an aspiring film student who wants to make a documentary on James’ search, and their friends Peter (Brandon Scott) and Ashley (Corbin Reid). Also along for the ride are Talia (Valorie Curry) and Lane (Wes Robinson), local residents responsible for uploading the grainy footage James watched and who have forever been interested in the legend of the Blair Witch as they do not live far from the events of the original movie.

Once these characters leave their cars behind, we are pretty confident they will never be seen again. Still, we are intrigued at the possibility of James meeting up with Heather as her body, nor Michael’s or Joshua’s, was never found. As expected, this expedition starts with everyone having fun by the campfire, but we all know what will happen from there. Once again, Goldblum’s dialogue from “The Lost World: Jurassic Park” was playing loudly in my head:

If there’s anything different about this “Blair Witch” movie, it is the technology. Whereas the trio from the original had video and film cameras at their disposal, these characters have GPS, walkie talkies, digital and DAT cameras, cell phones and a drone which can give them a wider view of the woods. But of course, they are in an area where their cell phones don’t get very good, if any, reception. As for the rest of their gear, it will only do them so much good as they venture deeper into the woods. I mean, we all know what curiosity did to the cat, right?

The beauty of “The Blair Witch Project” was that it never felt like a movie. Instead, it felt more like a unique experience we were not used to having. We were there in the woods with the characters as their situation became increasingly perilous and more terrifying as time went on. Unlike most horror movies, we were not inflicted with cheap scares every five minutes. We were creeped out by the ambiguity of the situation as our imagination ran riot over the things we could not see. This is not to mention the movie’s brilliant marketing campaign which included the fake documentary “Curse of the Blair Witch” and missing photos of the three filmmakers posted at theaters. I’m surprised the studio didn’t put their faces on milk cartons as well.

But “Blair Witch” is unable to match the original’s “you are there” feeling, and I could not escape the fact that I was watching a horror movie. Furthermore, it was a weak horror movie which takes us down a road we have traveled far too often. This time the filmmakers resort to jump scares, and only a few of them work. Also, the characters here are stereotypical ones we usually expect to see in movies like these, and they are none too bright to put it mildly. Then again, horror movies usually thrive on stupid characters because otherwise nothing interesting would ever happen. One character pleads for everyone to head back home, but no one is about to. Just as when Jon Voight suggested to Burt Reynolds in “Deliverance” that they go back home and play golf, we are presented with good advice which is not taken.

After a time, it felt like I was watching a mashup of a “Blair Witch” and a “Paranormal Activity” movie as the soundtrack gets overtaken by dark ominous sound and tents start flying up in the air which has our intrepid characters running for their lives while filming the action any which way they can. I mean heaven forbid they don’t get anything on camera because otherwise there would be no movie.

Let’s face it folks, the found footage genre has long since been beaten to death. It thrived for a time after “The Blair Witch Project,” and it was reignited to very terrifying effect with “Paranormal Activity” and a few of its sequel. But like anything Hollywood gets its hands on, it has been beaten to death to where we are left with diminishing returns in the form of “Paranormal Activity: The Ghost Dimension” and “The Hollows.” There’s nothing new to be found in this genre with “Blair Witch.” Nothing.

When Artisan Entertainment, which later became Lionsgate, decided to make “Book of Shadows: Blair Witch 2,” they hired “Paradise Lost” director Joe Berlinger to co-write and direct it. What resulted was a mess of a movie with bad acting and a poorly conceived story. Either that, or Artisan kept messing around with the movie and recut it behind Berlinger’s back as he has constantly accused them of doing.

This time around, they hired Adam Wingard to direct and Simon Barrett to write this movie, and this had me believing audiences were in for a treat. This is the same duo who gave us the black comedy slasher “You’re Next” and the highly underrated action thriller “The Guest.” Both movies show how familiar they were with the genres they cheerfully exploited, and they succeeded in bringing a freshness to those genres which appeared to have long since reached their peak. With them behind the camera(s) for “Blair Witch,” I felt they could bring something unique and fresh to the found footage genre, but even they can’t help but fall back on tried and true tricks, many of which we can see coming from a mile away.

For what it’s worth, Wingard and Barrett do give us a thrilling climax as the characters run through that creepy house we remember from the original, and we keep guessing as to how long they can last before they are pulled away with only their cameras left behind, recording the floor from an obtuse angle. But this sequence is not enough to save the movie, and what we are left with is, if you’ll excuse the expression, the same old shit.

The directors of the original, Daniel Myrick and Eduardo Sanchez, had often talked about doing a prequel which would show how the legend of the Blair Witch came about. That would be an interesting movie to see. Or perhaps we could get one where we see things from the point of view of the Blair Witch herself as she toys with the foolish humans by scaring them silly before eventually doing them in. One thing is for sure; unlike Donald Trump supporters, she does not discriminate.