Well, it’s not incredible, but it’s still pretty good. “The Incredible Hulk” is not so much a sequel as it is a reboot. Ang Lee’s “Hulk” was not the movie Marvel Comics fans were waiting for, and the backlash against it was pretty severe. This was a shame because Lee’s movie was not at all bad, but I came of it knowing it would get a lukewarm response from audiences because it was more of a character driven piece which the summer movie season typically relegates to arthouse cinemas. But with this action-packed blockbuster, fans will likely get more of what they were looking for the first time around.

“The Incredible Hulk” thankfully sprints past this particular superhero’s origins by doing a quick recap of Dr. Bruce Banner’s accident which turned him into the ferociously mad and enormous beast who tears through all of his clothing with the exception of his underwear (very convenient for a PG-13 rating). We catch up with Dr. Banner, now played by Edward Norton, in Brazil where he has successfully managed to control his anger for over 130 days. While working a menial job at a bottling plant, he continues to look for a cure which will keep him from turning green and becoming super pissed. As a result, Banner is one of the few people on this planet determined not to go green in order to save the environment. But despite all the breathing exercises he does to control his anger, we all know he will soon find it’s not easy to keep from being green.

This Hulk movie is a lot more action packed than the previous one as it starts up quickly and never lets the pace go slack. Directing this superhero reboot is Louis Leterrier who directed “The Transporter 2” and “Unleashed.” He clearly likes the hyperkinetic style of filmmaking and it shows throughout. The direction is not necessarily outstanding and Leterrier doesn’t seem to quite have a style of his own yet, but he gets the job done and he keeps the film entertaining from start to finish.

The cast is different as well, with nobody but Stan Lee and Lou Ferrigno, doing their mandatory cameos, returning from Lee’s film. Norton is in some ways a better fit for Bruce Banner than Eric Bana was, and a lot more animated too. He may not physically look like someone who could become the Hulk, but that’s the point. Norton also did an uncredited rewrite of the script, but the Writer’s Guild of America denied him credit (Zak Penn gets story and screenplay credit). As always, Norton reminds us why he is one of the best actors of his generation, and he comes across as an ordinary joe thrust into circumstances beyond his control.

Liv Tyler takes over the role of Dr. Betty Ross from Jennifer Connelly, and while she doesn’t have much of an acting range, she is always a nice presence to have in any film (not just as eye candy mind you). She holds up well next to Norton as they both work to find a way to stop him from becoming the Hulk again. William Hurt plays her father, Gen. Thaddeus ‘Thunderbolt’ Ross, and he is always an interesting actor to watch. All the same, I have to admit that I liked Sam Elliott better in this role when he played it in Lee’s version. Elliott comes across better as an army general than Hurt does, and he was one of the best things about the previous film.

But the best addition to “The Incredible Hulk” is Tim Roth as Emil Blonsky, chief nemesis to Dr. Banner and his angry alter-ego. After playing a wuss of a man in the highly disturbing remake of “Funny Games,” Roth is in bad ass mode as a soldier who wants to take the Hulk down, but soon finds himself wanting his power. In the film, Emil ends up getting injected, by choice mind you, with the same stuff Banner got injected with. It’s enough to give him the power to overcome the most serious of injuries, but he soon finds that he wants more of that power which leads him to become the Abomination. Roth’s character is actually one of the more complex and most realized characters in the movie.

Roth’s performance here is a reminder of what a strong presence he is and watching him here should help ease the memories of the torture he endured in “Funny Games.” How refreshing it would have been to see he Abomination take out those two young cads who tortured that family. Of course, Michael Haneke would just rewind back from Abomination’s victory to intentionally frustrate the audience.

If there is anything lacking in “The Incredible Hulk,” it is not as strong on character development. One of the strengths of “Hulk” was the attention it paid to its characters and how they really drove the movie. I know Marvel Studios didn’t want to get too caught up with this in this reboot, but it would have been nice to see more character work here to keep this from being just an average action movie. In the end, this was a movie made to please the fans who felt let down by what they saw in 2003.

I wish I could say that I loved this incarnation of the Hulk, but it didn’t quite reach the heights I wanted it to. But it still was a lot of fun and kept me entertained from start to finish. It is a flawed film, but we do get to see Hulk smash in a way we didn’t get to see as much of previously. That was probably the best thing about this film, seeing Hulk smash stuff up. Using two halves of a police car to take out stupid humans makes for great action. All the same, it could have been better. 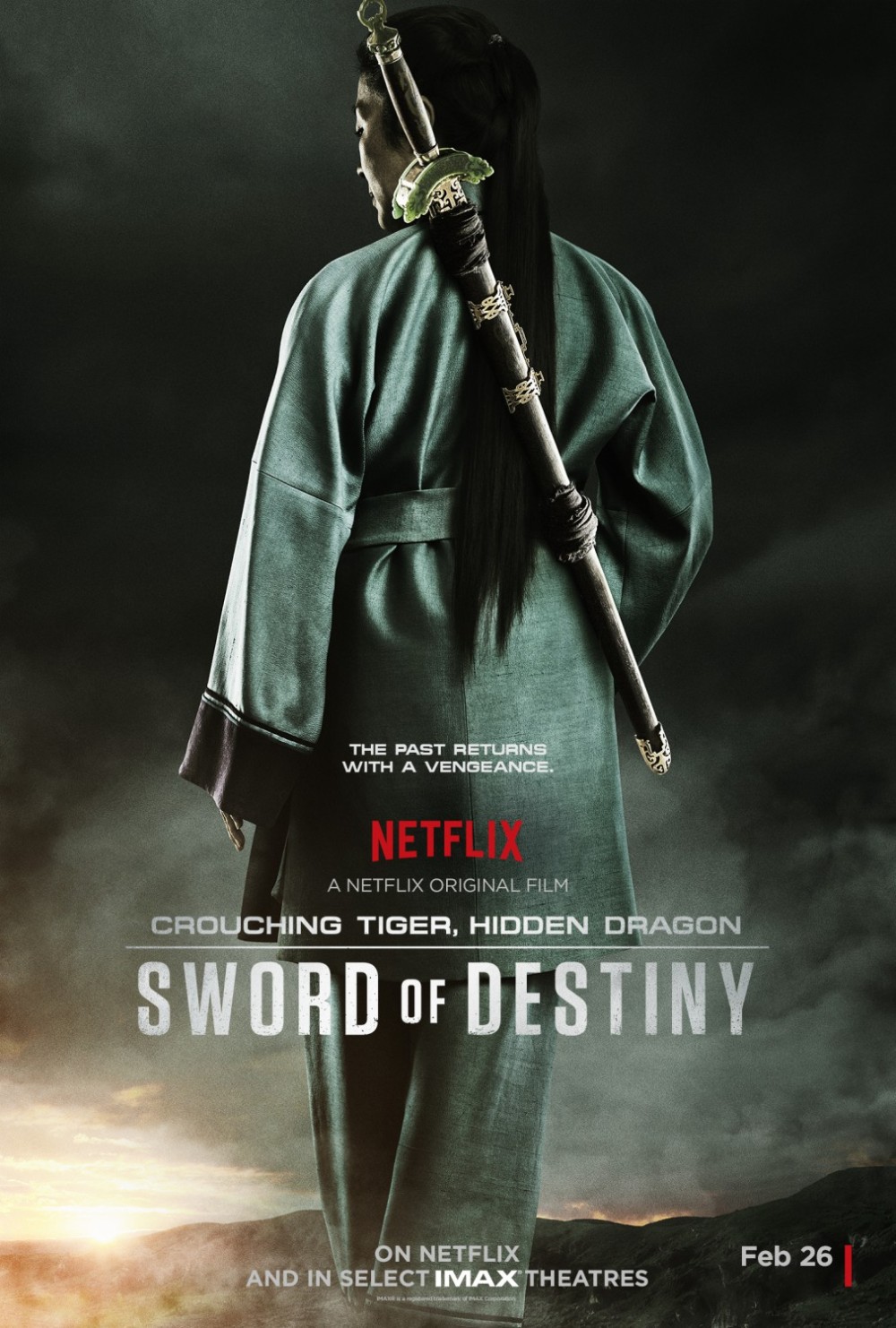 Ang Lee’s “Crouching Tiger, Hidden Dragon” is one of those few movies I can describe as being truly exhilarating. It combined amazing martial arts sequences with a great story filled with compelling characters you were eager to follow along with from start to finish. To simply call it a martial arts movie was not fair as Lee gleefully subverted the genre to give us something completely mesmerizing, and it went on to become one of the most successful foreign films ever made.

So it’s a shame to see its eagerly awaited sequel, “Crouching Tiger, Hidden Dragon: Sword of Destiny” doesn’t come even close to recapturing the spirit of the original. Michelle Yeoh returns as Yu Shu Lien and Yuen Woo-ping, who choreographed the action of the original, steps in as director, but those who loved the original are bound to feel like something is missing. While Woo-ping still delivers some amazing action scenes, he lacks Lee’s poetic touch.

“Sword of Destiny’s” greatest strength is definitely Yeoh who looks fantastic at 53 years old and can still kick ass and do her own stunts like nobody else’s business. She is the only cast member from the original to appear in this sequel, and she makes it almost worth a recommendation as her performance is as powerful and heartfelt as it was before.

The movie takes place 18 years after the events of the original and sees Yu Shu Lien coming out of solitude and heading back to Peking where her lover Li Mui Bai’s legendary sword, the Green Destiny, is being held. However, it doesn’t take long for her to encounter resistance as her carriage is attacked by several warriors. In the time she was away, various clans have wreaked havoc in the martial world in an effort to gain control of it, and many have their eye on stealing the Green Destiny which will allow them to rule it with unimpeachable power.

The Green Destiny was a major focal point of the original as Jen Lu (Zhang Ziyi) stole it in an attempt to engage in the warrior lifestyle she had become envious of. That sword is a focal point in the sequel as well to where I began to wonder if perhaps destroying it instead of keeping it safe and locked up would have made more sense. It certainly would have saved the martial world a lot of trouble. Then again, destroying that sword would also have meant destroying the past, so perhaps that’s why the characters are not eager to obliterate it even for their own safety.

We get a lot of characters thrown at us this time around like Wei-Fang (Harry Shum, Jr.) and Snow Vase (Natasha Liu Bordizzo), both of whom want the sword for their own purposes. There’s also Silent Wolf (Donnie Yen) who faked his own death because he was in love with Yu Shu Lien and preferred a life of solitude as he knew Li Mu Bai was the one she loved more. And then we have Hades Dai (Jason Scott Lee), the West Lotus warlord who learns he must obtain the Green Destiny as it will allow him to rule the Martial World.

With all these characters and their various plot threads, it’s hard to get involved in their individual dramas and they are nowhere as compelling as the ones from the original. Many of the characters we see here feel like typical kind martial arts movies tend rely on. Snow Vase in particular feels like a generic version of Jen Lu, and the latter only appears a footnote in this sequel. They all fight like the best warriors, but the action feels ordinary and less than thrilling because we don’t care that much for them.

Another thing about “Sword of Destiny” is the actors speak in English instead of Mandarin, and this proves to be a big mistake. While there are many who can’t stand subtitles, seeing the dialogue spoken in English makes it seem all the more clichéd and uninspired. It’s like watching the original “Crouching Tiger, Hidden Dragon” dubbed in English; it’s still cool to watch, but everything sounds rather laughable in another language. In Mandarin, there was at least a beauty to the words they otherwise would not have had.

But perhaps “Sword of Destiny’s” biggest sin is its overall look. While the original only used CGI effects to remove the wires which helped the actors to fly all over the place, this movie looks like it bathed in them. As a result, everything looks artificial to where “Sword of Destiny” has the appearance of a video game, and not a very good one at that. In fact, the movie at times looks quite ugly because you can easily tell that what’s on the screen is not at all real. While Lee made collapsing buildings look exciting, Woo-ping is not able to recapture that magic as scenes of warriors crashing through floors of a tower looks inescapably fake and all done on a computer.

Coming out of this sequel, I wondered if “Crouching Tiger, Hidden Dragon” even needed one. The stories of both movies connect, but this one looks like it exists on a different planet. Time will only tell if there is to be a “Crouching Tiger, Hidden Dragon 3,” but “Sword of Destiny” doesn’t make much of a case for one. Yeoh is great as always and Woo-ping does pull off some nice stunts, but this sequel feels uninspired and routine at best. Perhaps it’s time for the Green Destiny to be laid to rest once and for all. Just look at what Harry Potter did with the Elder Wand in the “Deathly Hallows;” problems were solved and the wizarding world was balanced out. It’s that simple.