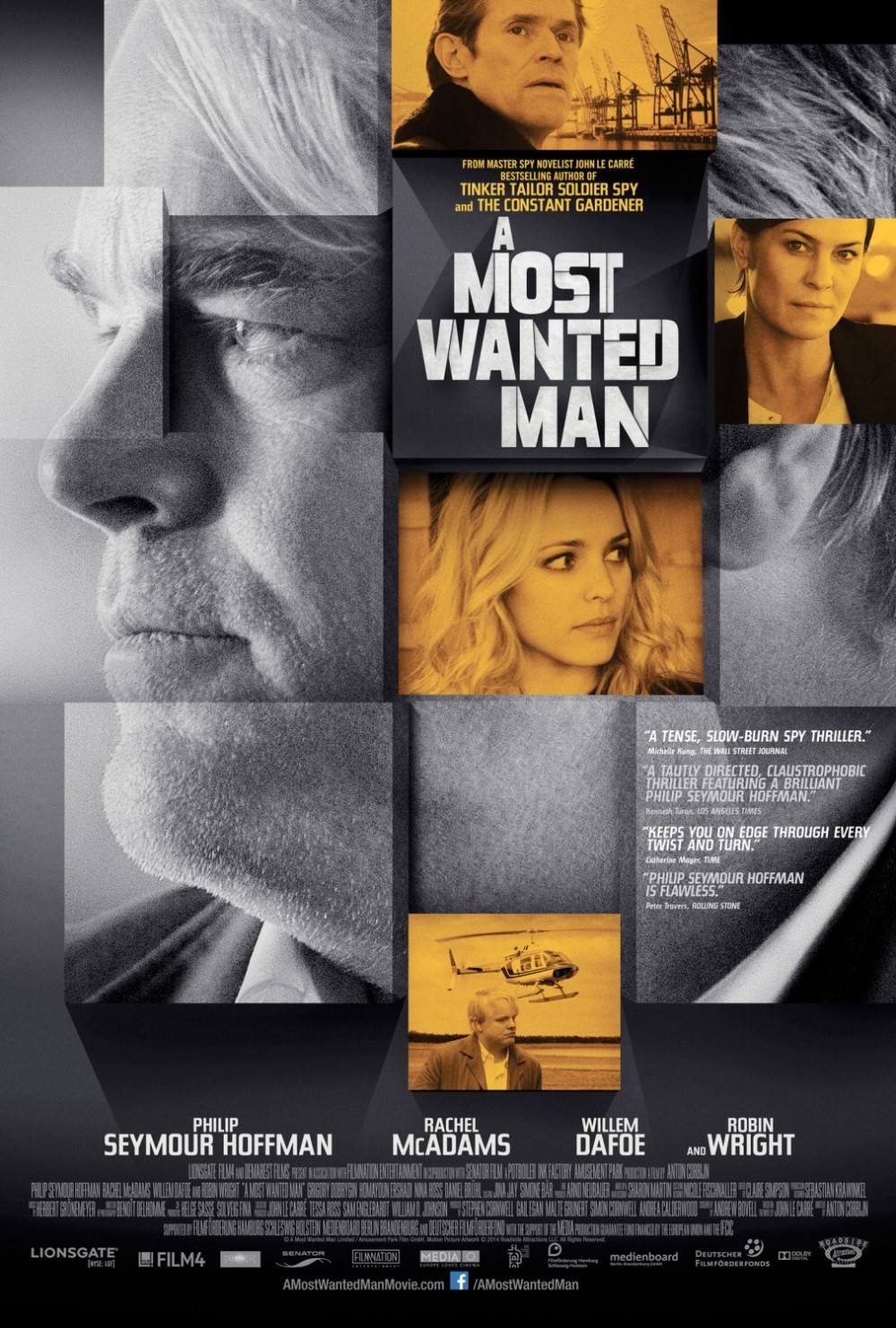 I have not read any John le Carre novels as of yet, but I have seen many movies based on them. Whether it’s “Tinker Tailor Soldier Spy” (be it the miniseries or the film), “The Constant Gardner,” “The Tailor of Panama” or “The Russia House,” all of Carré’s stories deal with people who have seen it all and have long since been burned out by the possibility of changing the way people exist in the world. Since he was once an employee of the British intelligence agency MI6, Carré’s books generally deal with spies who are not like the ones we remember from James Bond or Jason Bourne movies. Instead, these are spies who inhabit a morally duplicitous world they have to struggle in even as it tears away at who they once were. They claim to be doing this work for the sake of peace, but after a while, you begin to wonder how much they believe this as they soon look like they are kidding themselves.

“A Most Wanted Man” is the latest Carré cinematic adaptation, and it is a perfect example of the kind of spies he has become famous for writing about. This film has also taken on an added importance as it features the very last lead performance from the late Phillip Seymour Hoffman who plays Günter Bachmann, the weariest looking spy who has ever walked the face of the earth. Only Hoffman could have inhabited such a worn-out character and make him so endlessly fascinating as Günter goes through this movie looking like he barely has a pulse.

This movie starts off with a note saying the German port city of Hamburg is where Mohammed Atta and his collaborators planned the September 11th attacks. The fact Atta was able to plan the attacks without being caught beforehand was due to failures in intelligence among other things and, as a result, the intelligence operatives continue to work as hard as they can to make sure this never happens again. The story takes place over a decade after 9/11, and it doesn’t take too long to see how these characters still treat the horrific day as if it just happened yesterday.

Günter is the leader of an anti-terrorism team which seeks to develop sources within the Islamic community in the hopes of getting leads on high-profile subjects. His team eventually finds one in Issa Karpov (Grigoriy Dobrygin), a half-Chechen, half-Russian who has just immigrated to Hamburg illegally after suffering torture and imprisonment which has made him look like a walking corpse. At the same time, he is also on the verge of claiming an inheritance worth millions in Euros. The question is, will any of this inheritance go towards funding terrorist groups, or will Issa make sure it goes to who needs it the most?

“A Most Wanted Man” was directed by Anton Corbijn, a Dutch filmmaker who previously directed George Clooney in another spy movie called “The American,” and he is not out to give us the typical spy thriller designed to give the audience a potent adrenaline rush. The spies here are all about playing mind games with their prey as well as with those from another country than they are in getting into gun fights and car chases. This might frustrate some viewers who prefer their spy movies to exhilarate like few other cinematic experiences can, but Corbijn is intent on taking his time with this story at a pace which befits the le Carre novel it is based on. For those of you who have seen “The American,” this should not come as a surprise.

Seriously, not enough can be said about Hoffman’s performance. You never really catch him acting here. Hoffman simply becomes Günter right before our eyes, and he makes you feel his character’s weariness for all it’s worth. Watching Hoffman is heartbreaking because he really does give us a master class in acting here, and this sadly is one of the last times we will ever get to see him do that.

Among the highlights of “A Most Wanted Man” are the scenes Hoffman has with Robin Wright who plays CIA agent Martha Sullivan. Currently on a critical high from her work on the Netflix series “House of Cards,” Wright matches Hoffman scene for scene as these two play a mental game of chess, trying to guess what the other is thinking without revealing too much of themselves in the process. Looking into the eyes of both these actors, you can tell how much fun they have sparring with one another. When they tell one another they are trying to make the world a safer place, you can smell the deceitful sarcasm dripping from their mouths as their jobs now force them to become competitors over nabbing the next big terrorist suspect.

Granted, Hoffman’s German accent is a little off-putting at first, but we do get used to it eventually just as we do with the one Rachel McAdams pulls off. McAdams portrays Annabel Richter, a deeply passionate human rights attorney who does her best to protect Issa from unnecessary prosecution. However, when Annabel is put in a position where she is forced to betray those closest to her, McAdams makes you feel her character’s agony without even having to use words to express it. As for Willem Dafoe who plays bank manager Tommy Brue, you can never really go wrong with him in anything he’s in.

“A Most Wanted Man” is, at times, a little hard to follow to where you may come out of it thinking the plot was a little too convoluted for its own good, but most viewers should be able to get the gist of the story. The pace is also a little too slow at times although things do pick up before the end. Whatever the case, it is definitely worth seeing for the performances, especially the ones given by Hoffman and Wright. It will be hard to escape the bittersweet feeling this movie leaves you with as this is one of Hoffman’s last, and I came out of it wondering if we would ever see an actor like him ever again; one who doesn’t look like a movie star but whose talents have more than earned him the right to be one.