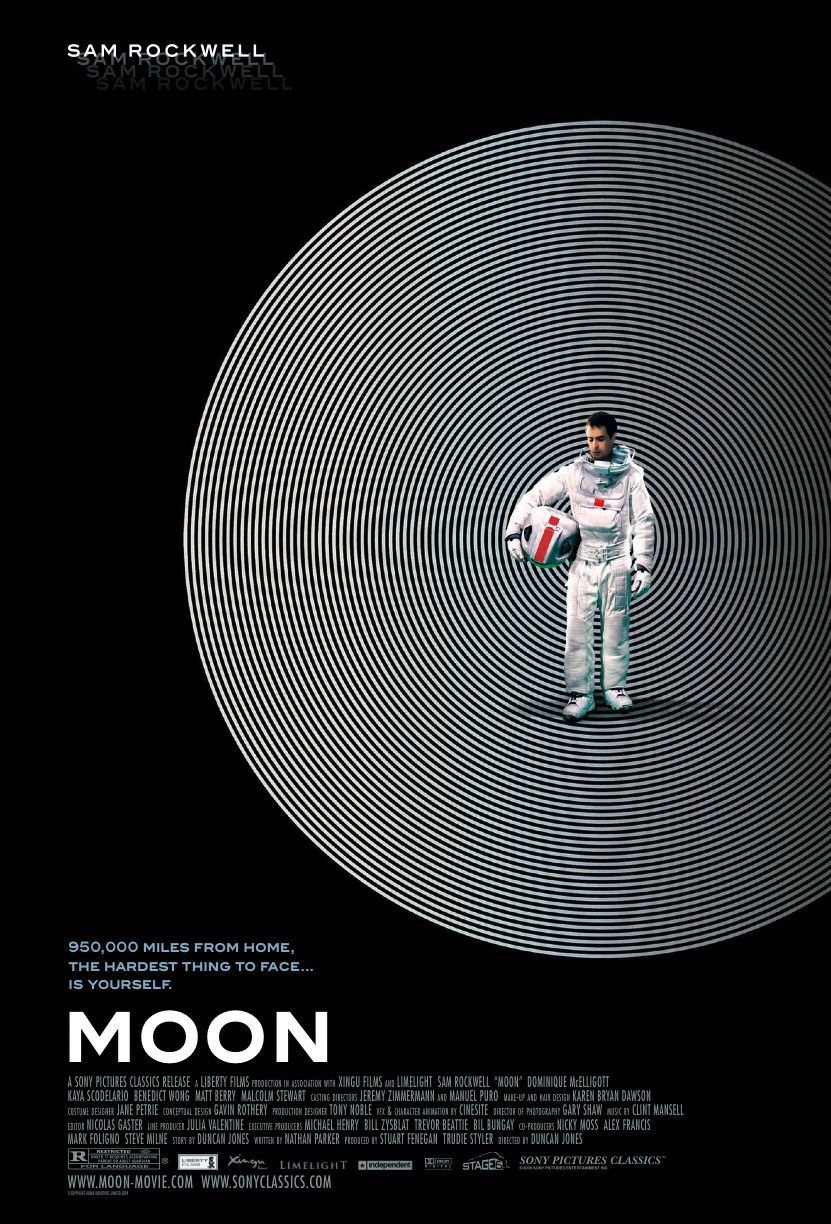 Filmmaker Duncan Jones was the guest of honor at New Beverly Cinema on November 19, 2011 where his first two movies “Moon” and “Source Code” were being shown. Right after “Moon” finished, he leapt up to the stage like a contestant on “The Price Is Right” for a Q&A alongside his “Moon” producer Stuart Fenegan. Sam Rockwell and Kevin Spacey were not in attendance, but Jones brought along Rockwell’s spacesuit and a balloon of Gerty’s face as their stand ins.

Jones explained how he had worked in the advertising industry for years with the goal of eventually working in movies. He originally wanted his first film to be “Mute” which takes place in a futuristic Berlin, but he and Fenegan came to the conclusion it was too big for them to make into a movie at that point. It’s amazing to learn “Moon” only cost $5 million to make, and Jones said he was determined to squeeze as much out of that amount as possible. Fenegan was quick to point out what was at stake and said, “With the first movie, commercial success is far more important than critical success as it determines whether you’ll make another.”

There were two distinctive sets Jones had to work with on “Moon;” a 360-degree space station set which everyone got stuck in for the day once it was sealed, and another for the lunar module which Rockwell’s character uses to travel outside. As for Gerty, the “2001” Hal-like character voiced by Spacey, Jones described it as a beautiful model which could be moved around the set, but that it was a CGI effect in the wide shots. The special effects ended up getting a polish from Cinesite, a digital visual effects and post-production facility in London.

One audience member asked if Rockwell’s character was named Sam on purpose, to which Jones said yes. “Moon” was made with Rockwell in mind for the lead, and since he plays different clones of the same person, Jones really wanted to mess with his head during the 33-day shoot. This way, Jones said, the actor would be constantly reminded of the movie’s thematic elements. While this made Rockwell uncomfortable at times, Jones described him as a good sport overall.

In terms of influences, Jones said “Moon” was inspired by many science fiction movies he watched in the 60’s and 70’s. Specifically, he cited Bruce Dern in “Silent Running,” Sean Connery in “Outland,” and the first chunk of “Alien” as the biggest influences on the movie’s story. The characters in these films came from a working class or blue collar environment, and the portrayal of it in an outer space setting made everything seem more real and relatable. As for must see movie recommendations, Jones replied “Blade Runner” is the be all and end all of science fiction. You could follow any character in Ridley Scott’s film, he said, and you would still have an amazing movie.

When asked of his future plans, Jones said that he has finished polishing his latest script and will be sending it to the one person he wants to star in it (he wouldn’t say who). It is another science fiction movie, but the director is eager to move beyond this particular genre. With “Moon” now being considered as one of the best science fiction movies of the past few years though, I’m sure his fans will be begging him to revisit the genre more often than not.